The sister of a PPBM vice-president today came under fire from internet users, including a party leader, after she posted racist remarks on her social media page.

In a Facebook post, Hamizura Osman, who is the sister of PPBM vice-president Hamidah Osman, said Malays shouldn’t allow the Chinese to “step” on them and that Malaysia belonged to the Malays.


“In our efforts to topple Najib, at the same time, don’t let the Chinese step on us. There is no need to praise the Chinese among us. It is the Chinese who should beg the Malays. This land belongs to Malays,” she said.

Hamizura has since apologised over the remark.

This comes after her post drew mixed response, with some supporting her statement and others condemning her for it.

PPBM supreme council member Tariq Ismail was among those who slammed her for her remarks.

It's only a matter of time a Pribumi member like Hamizura Osman, who is the sister of PPBM vice-president Hamidah Osman, would burst forth with her ultra-pribumi diatribe. Don't blame her bigotry as that's her intrinsic self - and that's precisely why she joins the ketuanan Pribumi Party.

By the by, last week her sister, Pribumi VP Hamidah Osman has been accused by Pribumi's non-stop tok-kok Syed Saddiq Syed Abdul of masterminding the mass resignation of more than 1,000 Perak PPBM members. 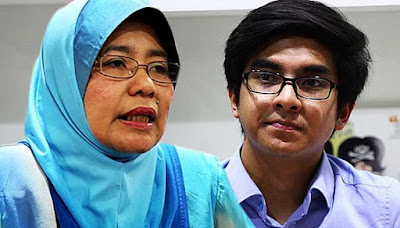 Before joining Pribumi, Hamidah Osman was the former Gopeng Umno Wanita chief, was labelled by Syed Saddiq as a hypocrite who took vengeful action because she was upset by Muhyiddin Yassin’s decision not to name her as PPBM Perak state chief.

And again we meet new Pribumi Chief Salvage Officer Tariq Ismail who had just attempted to 'save' Laksamana Hang Mukhriz Tuah a.k.a. the Malaysian Horatio Nelson from declaring war against Myanmar, wakakaka, and who now is trying to moderate Hamizura's racist outburst.

But Pribumi is invariably inevitably and intrinsically racist.