Hoo made his criticism in the wake of Anwar’s appearance before the royal commission that is inquiring into the scandal. Anwar said in his testimony last week that he merely presented to the cabinet the facts given in the central bank’s annual financial statement. This was in 1993.

Speaking to FMT, Hoo noted that Anwar indicated he knew about the forex trading but was not involved in it.

“As finance minister overlooking BNM, he had the power to look further into the report he received. He cannot just accept the report at face value and shut up.”

Anwar was grilled by the royal commission for about half an hour last Thursday. The tribunal’s chairman, Mohd Sidek Hassan, accused him of failing to reveal that BNM was suffering losses from its forex trading.

Another member of the commission, Saw Choo Boon, said the annual report Anwar presented to the the cabinet didn’t show losses, although BNM had lost RM12 billion in 1992 and RM15 billion in 1993.

Anwar said his report to the cabinet was based on the bank’s audited report and that he was “duty bound” to go by the books although he knew of the actual losses.

Hoo said Anwar, in failing to investigate the losses, had neglected his fiduciary duty. He added that it was a serious neglect because it came at a time when Malaysia’s gross domestic product (GDP) was only RM100 billion.

Hoo said there might also have been a breach of BNM rules and added that it was imperative for the royal commission to recommend police investigations.

“All those involved in the scandal, either directly or by failing in their fiduciary duty, should be investigated,” he said.

Anwar might have been the 'fall guy' for someone, which could be why he couldn't release more details or explain the Forex humongous loss.

As the Forex gambling was very hush-hush to the extent that even the late governor of Bank Negara, Tan Sri Jaafar Hussein, was caught completely clueless, Anwar might also be quite unaware of what really was involved, or was told a la 'jangan campur tangan, arahan dari atas'.

A 'patsy' twice over. I feel sorry for Anwar, but as Ho Ke Ping said, he as Finance Minister was responsible, just like Musa Hitam was made responsible for someone's Memali. 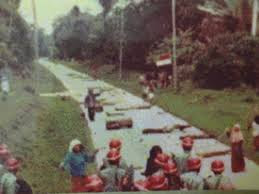