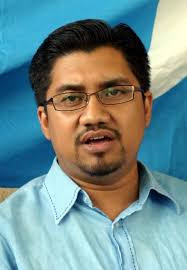 Speaking to Berita Daily, Badrul or better known as Chegubard, said that the statement from Anwar was made by certain quarters to justify PKR deputy president Azmin Ali’s effort in talking to the Islamic party.

“From my experience in talking and communicating with Anwar Ibrahim, I can say that the letter was not written by him.

“The statement can be made in many ways. I believe that it was copied, re-written and was published to benefit some people.

“What is clear, the statement was made up to justify Azmin’s negotiation effort that it was all Anwar’s wish,” he said.
Posted by KTemoc at 4:19 pm