DAP's comedy (or tragedy) of errors with Tunku Aziz

The Chinese (Penang Hokkien) equivalent of the Malay word biadap is boe kar see, meaning ‘not taught proper manners’ (obviously by parents and/or elders of the one scolded). The full Penang Hokkien term in fact is beh-boe* [parents] boe-kar-see. 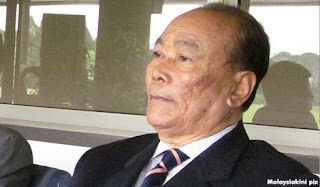 Both Malay and Chinese terms are very damning, excoriating not just the one scolded but particularly the parents for not teaching their child proper manners. The Chinese consider such a description as a very serious insult.

I wrote on this insult in a previous post Gerakan Party insults Chinese, as follows:

Just a quick intro to what I have to say about Gerakan's hurtful words - The second most hurtful comment against a Chinese is ‘boe kar see’ or kurang ajar (or biadap), because that reflects more on the person’s parents for not bringing up the person correctly. And a typical Chinese most certainly doesn't want his/her parents criticized in that manner.

As Confucius instructed: The superior man, while his parents are alive, reverently nourishes them; and, when they are dead, reverently sacrifices to them. His thought to the end of his life is how not to disgrace them.

But the most hurtful comment against a Chinese is ….. the terrible term ‘harm kar ch’arn’, a curse meaning (words to the effect) that ‘may your family line be extinguished forever’.

When Tunku Aziz described Lim GE as biadap, he was not just scolding the son but Lim Kit Siang, the father as well. I wonder whether Tunku had realized that, considering he had in that same session when he insulted Lim Junior, ironically also reaffirmed his friendship with Lim Senior?

Look, we Asians are particularly sensitive to the tone, undercurrents, subtext and the real feelings and cause of such a damning insult to at least two generations of Lim’s. Thus I shall attempt to emulate Josh Hong and provide some thoughts on the why’s and wherefore’s of Tunku’s unusual outburst.

For a start, 78 year old Tunku must have considered himself a senior statesman (regardless of his DAP membership), and mind you, I do support his self-evaluated political worth.

Thus, he felt he had the rights to issue advice on what he saw (then) as an impending violation of the law by the Bersih participants. Again, I have to say I did support that prediction as I had written in another post Bersih - "Uncle okay?", Auntie is okay! the following:

Tunku obviously knew who the troublemakers were, wakakaka, and of course as the senior statesman he considered himself to be, he must have believed that unlike the average party hoi polloi, he would be allowed some latitude to express his advice.

But alas, Lim GE as the DAP sec-gen had no choice but to show solidarity with Pakatan which was supporting Bersih. So he had to publicly chide Tunku for not being in line with Pakatan policy on the campaign.

For such a person as 78 year old Tunku to be chided in public by a relatively young chico was really too much. He would have already been quietly fuming at Lim’s biadap-ness.

The straw that broke his quiet tolerance was the offer of a fellowship and the mentioning of the associated stipend, both of which would be seen (by a man like Tunku) as grossly tacky (and thus insulting) consolation prizes.

According to Malaysiakini’s Guan Eng declines to counter-attack Tunku Aziz:

Penang Institute chief executive officer Zairil Mohd Khir has expressed regret that his offer of a senior fellowship to Tunku Aziz had been “misconstrued”.

Zairil said when it became clear that Tunku Aziz did not wish to be re-nominated for another term as a senator, the institute saw it as an opportunity to recruit a public intellectual with a valuable global network.

Zairil, who is political secretary to the chief minister, added that the post offered to Tunku Aziz comes with a standard package for senior fellowship that includes a yearly stipend of RM50,000. […]

“Out of respect for Tunku Aziz’s position as a senior figure, we requested the Penang chief minister, who is also the chairperson of Penang Institute, to convey our offer of a senior fellowship,” he said.

“At no time did the chief minister speak about the terms of the appointment or any financial details during their telephone conversation last Friday,” he added.

“The terms of the senior fellowship were only conveyed by me on Monday morning to Tunku Aziz when I followed-up on the chief minister’s call,” he stressed.

Zairil said as a think-tank, the job offered to Tunku Aziz entailed writing research papers and attending conferences overseas, denying that “travel” was a bait to persuade the latter to accept the job. […]

Zairil expressed regret that the institute’s enthusiasm to have Tunku Aziz on board by requesting the chief minister to convey its offer has not only been misconstrued to justify his leaving the party, but also “used to malign” Lim.

He added that the offer was not meant to be compensation for his senatorship, but in fact a genuine offer based on a desire to make the best use of Tunku Aziz’s talent in the service of the state after his retirement as a senator.

But Tunku saw it differently as he was, as mentioned above, already smarting from the public chiding by a young chico, and perhaps even at the DAP’s failure to ‘persuade’ him from withdrawing from a second term as senator.

We Asians should be aware that senior people like to be ‘persuaded’ to stay on in office, even and especially when they offer to withdraw or resign (not unlike Dr Mahathir wakakaka). So I suspect when DAP failed to show proper due 'respect' by insisting, persuading, begging him to do a second term as a senator, he must have felt terribly hurt – perasaan tersinggung sangat!

When the fellowship offer came via that ‘ill-mannered’ young chico, Tunku must have felt mightily insulted, and the straw finally broke his back when Zairil rang him up to mention the stipend.

It was just too much for a man like him to accept (what he saw as) insult after insult after insult. He cried out in agony: “Did he think I was that kind of person? This man has no sense of decency. The only word is a Malay word, and it’s ‘biadap’”.

Well, not exactly for as mentioned, there’s also the Chinese equivalent term of boe kar see, but I doubt Tunku would be interested in that right now, wakakaka.

Anyway, regardless of the cross lines and incorrect trans-generational interpretations, basically a comedy (or tragedy) of errors on both sides, the harm in fact has already been done much earlier when Lim Junior chided him publicly.

Tunku is not unlike Dr Rama where both want respect due to their elderly and senior status, though of course their problems with the DAP leadership were caused by different issues. If you recall, Dr Rama had also threatened to resign rather than apologize for whatever he was accused of, seeing in the whole affair as a lack of respect for him.

I suppose we can term both as prima donnas wakakaka. Nonetheless, I feel rather sad that Tunku has decided to end his association with DAP and in particular Lim GE in such an acrimonious manner.

But I am glad that Guan Eng has firmly closed the issue in a gracious manner.