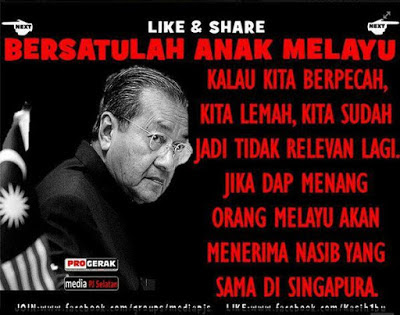 Dr Mahathir Mohamad has disclosed that he has in mind several candidates from the opposition to assume the post of prime minister should Pakatan Harapan (PH) take control of Putrajaya in the upcoming 14th general election (GE14).

The chairman of PH and PPBM was however reluctant to reveal the names of these individuals and which component parties they were from, saying that it would stir controversy. [...]

The revelation that there is more than one person being considered from the opposition is at odds with PKR’s expressed desire to have its de facto leader Anwar Ibrahim to be made the premier. Anwar is also de facto head of PH.

Delegates at the PKR national congress on May 21 had held up placards supporting Anwar for prime minister. Mahathir, who was seated with other PH leaders did not hold up the card that read “Anwar the 7th PM”, but was instead seen recording the scene on his mobile phone.

Instead, on June 6, Mahathir reportedly told top businessmen and opinion leaders in Tokyo that there was a possibility he might be prime minister again if the opposition won, but it would be for “a short while”.

“If there is no candidate … I might try, only on condition that everybody agrees,” he said.

Wakakaka1 - Of course Mahathir won't reveal Pakatan potential candidates for the PM post as there is only one, and he has appointed himself as PM-to-be.

Wakakaka2 - Anwar has been abandoned kau kau regardless of what PKR might have wished. And Lim Kit Siang agrees, saying said Anwar can only be the 8th but not 7th PM (after Mahathir? After Mukhriz? After Azmin? wakakaka).

Wakakaka3 - everyone in Pakatan Harapan shuts the f**k up when Boss speaks.