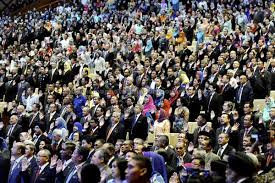 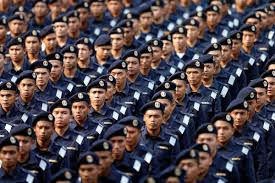 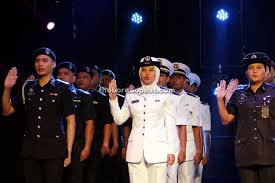 Among the reasons for the Malaysian civil service’s lower proficiency, Pennington claimed, were its size and its dominance by Malays. Razak’s rebuttal offers no good justifications for the bloated civil service in Malaysia, except to say it has to do with the need for ‘affirmative action’. Methinks Razak Baginda doth protest too much.

Malaysia’s bureaucracy is one of the biggest in the world, with 1.3 million civil servants from a population of 30 million, or 4.5 percent, compared with Singapore’s civil service (1.5 percent), or those of Hong Kong and Taiwan (2.3 percent).

We are spending more than RM41 billion a year for upkeep of the civil service. Now you could protest that Singapore and Hong Kong are small city states, but what about a larger country like Taiwan?

While it is the growing trend of many countries to reduce the size of their civil service, Malaysia’s Prime Minister’s Department in particular has done the opposite. It has more than doubled the number of civil servants from 21,000 to 43,554. In stark contrast, the White House employs only 1,888 staff.

Now, what was it that Pennington said that riled Razak Baginda?

Pennington highlighted a 2015 World Bank report that ranked Singapore as the world’s best for government effectiveness. Malaysia was placed 43rd among 170 countries.

Among the reasons for the Malaysian civil service’s lower proficiency, Pennington claimed, were its hugeness and its dominance by Malays.

He also said Singapore’s decision to pay its civil servants well and its willingness to embrace new technology were some of the reasons for its civil service’s proficiency.

........ he would advise Pennington to get a better perspective of things before making such comparisons.

“I would like to quote our great Dr Mahathir Mohamad who once asked: ‘What’s so difficult about managing Singapore? It’s like managing Kuala Lumpur,'” he said.

“In terms of diversity, population size, physical size and much more, managing Singapore is just like managing Kuala Lumpur. You cannot compare oranges and lemons.”

He pointed out that Singapore also did not have to deal with the unique challenges Malaysia faced, such as affirmative action policies.

Both Dr Kua and Razak Baginda have been right, to wit, Razak's contention the bloated civil service has to do with someone's affirmative' action (yes, Razak doth protest too much and I'll come to this in a while) as well as Dr Kua's criticism of the Malaysian civil service as being over-bloated and inefficient.

I needn't go into the issue that the Malaysian Civil Service, which includes its Armed Forces, Police, Immigration, Customs, etc etc etc are made up on almost one race, namely, the Malays.

It is an issue born out of official approval.

Once upon a time there was an administrative Operation called Ops 'Isi Penuh', whence Civil Service leaders were ORDERED to f**king staff their departments up, or ELSE.

Guess who gave that order?

T'was none other than the Emperor who mutilated the Constitution, Judiciary, Senate and of course the Malaysian Civil Service.

Yes, it was affirmative action, to remove unemployed idling but voting-youths off the street and presumably into UMNO's vote bank. But the Operation was over-the-top, perhaps because we had lots and lots of money from our once wealthy oil resources, so WTF with a few pence here and there - all sap sap suoi stuff. Thus was his reign blessed with mucho money to waste in a profligate manner.

Even Malay Department heads grumbled at the reckless silliness of 'Isi Penuh', but what could they do against His Imperial Majesty? By the end of 2006, more than 90% of 1.15 civil servants were Malays.

That was how your once-Emperor operated.

Yes, the Operation was ordered from the No 1 Man, thus in the mad rush to meet his imperial order, rubbish was recruited in that Nazi-ordered 'Isi Penuh' scramble, and thus today you'd get rubbish out, and the malaise has not stop since.

Today it's no longer his problem - usual stuff, his successorS have to deal with it.

Earlier this year, Second Finance Minister Johari Abdul Ghani openly and honestly stated that the civil service, although bloated, will not be reduced, but it will be made more multi-tasked, to improve productivity. This statement is serious but is also worrisome.

Razak Baginda repeated Maddy's kok-tok about Singapore being like ruling KL, when even KL itself did not perform to support his views.

You need only look at how Singapore is being run to see the nonsense of Razak Baginda's valiant but vain attempt to defend Mahathir's policies.

Productivity is sh*t considering we have 1 civil servant per 19.37 people, yet there have been undue delays, corruption and lackadaisical attitude in services towards the public.

The downhill journey for our once-impeccable Civil Service started with Operasi Isi Penuh which doubled its workforce of approximately 400,000 to a massive 800,000 in 1983. As just mentioned, the imperial conceptualizer was none other than your only Emperor of Malaysia. 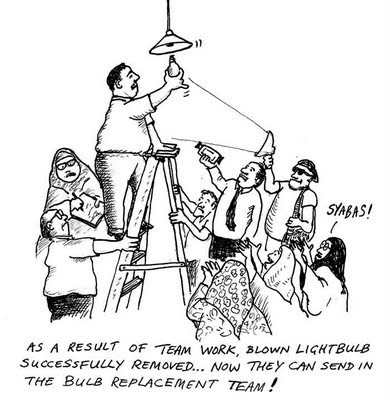 Like most of his schemes, his Operasi Isi Penuh wasa terrible failure.

But in fixing a tactical problem he endowed us with a strategic headache, as he had done so with so many other issues, eg. judiciary, senate, forex, bmf, bank bumiputra, maminco, memali, Sabah illegal influx, perwaja, proton, bakun, road tolls, etc etc etc - so what's new?

My uncles and friends related how Operasi Isi Penuh was seen to be exorbitantly, needlessly and excessively profligate in its implementation, where they recalled department heads being instructed in no uncertain terms and even pressured to 'top up' their staffing a.s.a.p.

Suffice to say it was all about political gains for Maddy and his ruling party, and not so much about public service for the rakyat, because even until today, many Malaysians even have mucho complaints about services at government departments and agencies, where in some extreme cases, the public servants became the Tuan and the tuan-rakyat became the servants.

But Razak Baginda has been right in that it was 'affirmative action' but masked as such to hide its real aim, that not unlike Project Blue IC in Sabah.

I wonder whether such profligacy, as in our numerous cases of profligacy over the past 35 years, was an outcome from the curse rather than the blessing of our then considerable oil and gas assets.

We then had too much wealth which might possibly have led to such excessive extravaganza including, I heard, dropping a Proton Saga at the North Pole - and for what? For Santa Claus?