Dzulkifli said he was open to criticism from the DAP leader but it should be conveyed in a civilised manner.

“The people can judge whether the behaviour and words of the DAP leader are in accordance with Malaysian culture. We are civilised people but the words used are extreme and uncivilised,” he said to reporters after attending the unveiling of an anti-corruption mural by Perak Menteri Besar Datuk Seri Dr Zambry Abd Kadir at the MACC Perak office in conjunction with the MACC anti-corruption roadshow, here.

A news portal reported today that Lim criticised Dzulkifli by saying that all eyes were on the graft-buster, on whether he would lead a clean MACC.

Lim said Dzulkifli should realise that if acted as the traditional three monkeys — with eyes that see not, ears that hear not, and a mouth that speaks not — about the 1MDB scandal, he would be making the MACC into the first ‘kleptocratic’ anti-corruption agency in the world. — Bernama. 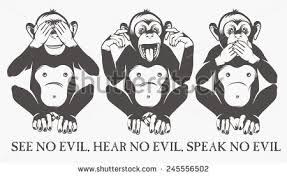 Wakakaka, Dzulkifli Ahmad has taken LKS' words about the 3 monkeys LITERALLY. And you know what? I am actually glad LKS has been scolded by MACC, even if for the silly wrong reason.

Afterall, MACC has been the best matey of LKS who abandoned justice for the Teoh family just to rub shoulders with that useless organisation. Padan muka.

But on the alleged '3 monkeys' insult, wakakaka, that's the problem of using idioms, colloquialisms and proverbs with people like the MACC DG. That's obvious evidence why Malaysian English has gone from bad to worse.

(b) Let us not forget Teoh Beng Hock.