Najib's trip to Washington - Fake News from the Truth?

MM Editor-in Chief Wing Sai Wan has been so incensed by the 'nonsense' (his words) published in some media outlet since Najib's recent trip to meet up with Trump that he felt compelled to disabuse those 'fake news' from the truth. Let's hear what Wong has to say in the MM Online:

MM Online - Why Najib’s Washington visit was a success: 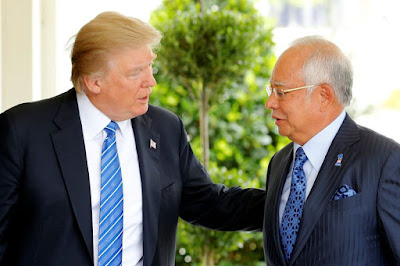 KUALA LUMPUR, Sept 16 — I never intended to write this piece but the nonsense that I have been reading on social media in the past three days has compelled me to put to writing to separate fact from fiction.

I was part of the Malaysian press corp that covered the trip and before anyone says it, I will tell you that every single newspaper and TV station paid for their own trip and not the government.

So do not accuse me of being bribed.

How long did they meet?

Datuk Seri Najib Razak and his team met with President Donald Trump and his senior Cabinet members for over 50 minutes of which the Prime Minister met President Trump one-to-one for 20 minutes.

Many critics have pointed to the five-minute video and transcript released by the White House, presuming that it was the only amount of time Najib and team got from their American host.

What was released by the White House was nothing more than the opening remarks by the two leaders for the benefit of the tens of TV cameras and a dozen-odd newsmen present in the Cabinet Room in the West Wing of the White House.

It was just a show for the benefit of the cameras and sound bite for the newsmen. What they spoke after the cameras and journalists were gone was much more in depth but unlike the opposition politicians, I will not speculate what was said exactly because I was not there then.

The Opposition leaders were quick to jump on the transcript and video as though that was all that had happened.

But I can confirm that the transcript of the opening remarks was accurate because I was there.

The White House’s protocol officer David Solomon had briefed everyone that we were going into the Cabinet Room just for the opening remarks and would have to leave before the actual meeting started.

The transcript released by the White House was for the benefit of the newsmen present so that they got their quotes correct. As we all know the White House press corp are not very friendly to Trump. So it was released to ensure no one in the US media can misquote him.

As a result, none of the American print media bothered to use much of the transcript at all.

Anything that sounds good for Trump is not news for the US print media.

So the truth is that the bilateral meeting between the American and Malaysian team lasted 30 minutes and not the mere six minutes.

We were told by press officers from both side the two leaders also had a separate meeting with each other in the Oval Room which lasted about 20 minutes.

Our Employees Provident Fund have been investing in the US equity market since 2008 when the law was amended to allow EPF to invest overseas. As part of the Capital Controls Act introduced in 1998, the EPF was previously not allowed to do so.

In fact, the EPF has invested some US$26 billion since 2008 and has made good returns. If one looks at the markets in Malaysia and compares it with the US after 2008, one will see that the US equity has offered better returns than ours.

I strongly suspect that the majority of over 5.5 per cent dividends that we have been getting since 2009 came from the overseas investments that the EPF has been making.

There is a very high level EPF investment committee made up of respectable professionals.

On top of the return on the investment, we can safely say that the EPF must have also made a killing from the depreciated ringgit.

Propping up the US economy

This is probably just posturing on the part of Najib in front of an American leader who is out to “make America great again.”

EPF would have already decided what and where they will invest even before Najib’s visit and the decision was based on returns and not to prop up the US economy.

Trump has made it known from when he was campaigning that rebuilding ageing American infrastructure was among his priority. Thus it will only make sense to invest in equities and funds that will benefit from this policy.

So in that sense Malaysia will be investing in making “America great again” but everyone forgets that EPF will probably make a lot of money from doing so.

Najib’s visit to Washington came in the light of a list of countries listed as “Trade Cheats” who are responsible for America’s nearly US$50 billion trade deficit.

Najib came knowing that he had to show to Trump that trade is a two-way thing and was in Washington bearing goodies.

This was why he chose the phrase “value proposition” when talking about the investments.

Previous Malaysian prime ministers went to the US with the intention of getting investors to come to Malaysia. Najib wanted to show Trump that he was not there to do the same.

Beyond all the pomp and formality, this visit was about business.

Trump broke all protocol when it came to Najib and reminded all his officers twice “he is my friend”.

First was when Najib arrived. Usual protocol would have the Vice-President (in this case Mike Pence) to receive the visiting VIP but Trump decided he would welcome Najib himself at the door.

This was the first time when he told his protocol officer, “he is my friend.”

The second time was when Najib was about to leave. Usually the US president would see his guest to the door of his Oval Office but Trump walked Najib all the way to the downstairs gate to his car.

Again, he brushed off reminders of the protocol by saying “he is my friend.”

As widely reported the two leaders struck up a friendship when they played golf at one of Trump’s golf course. There is a picture of that event in Najib’s office which Trump inscribed on the picture, “To my favourite PM.”

Yes, the two men spoke about golf on this trip but did not play as it was meant for business.

Why then did Najib decided to stay at the Trump International Hotel? Because it was the best one in town and was situated just between the White House and the Capitol Hill. It made logistical sense.

Trump had promised when he became president that any profit made from visiting leaders who stayed at the hotel would be donated to charity. He didn’t make a cent from Najib’s trip.

So was the trip a success? For Najib it was a huge success as it put to rest the negative DOJ stories about him and more importantly he renewed his friendship with Trump.

For Malaysia? It was a good trip as we are now again back on the map for the US and they have reaffirmed Malaysia as a comprehensive partner.