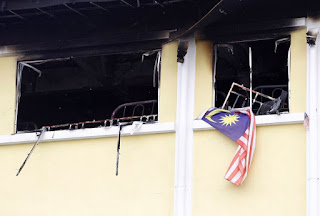 KUALA LUMPUR, Sept 14 — The chairman of Majlis Dakwah Negara pointed out today that school fires in Malaysia appeared to plague only tahfiz schools.

While stressing he was not delving into the reasons for the latest tahfiz school fire that killed 23 people today, Datuk Dr Mahmood Zuhdi Haji Abd Majid said it was imperative to confront the obvious problem.

“Why does it only happen in hut schools and not other institutions? It certainly cannot be fate alone, but the result of administration that makes it become fate,” he said in a statement.

“Yes, it is our administrative failings that expose us to the fate promised by Allah.”

Twenty-three people died after a fire broke out at Tahfiz Darul Quran Ittifaqiyah in Kampung Datuk Keramat this morning, the latest involving a religious school.

Around 600 such privately operated schools exist under the purview of various state religious authorities in the country.

Not all adhere to safety and fire regulations applicable to public schools, and Deputy Prime Minister Datuk Seri Ahmad Zahid Hamidi said today that some resist the introduction of such rules for fear that these may be an attempt to interfere in their affairs.

In saying “Why does it only happen in hut schools and not other institutions? It certainly cannot be fate alone, but the result of administration that makes it become fate,” Mahmood Zuhdi, Chairman of the Majlis Dakwah Negara was saying that administrative neglect has made the tragedy fate, or an act of Allah swt.

And he confirmed my layman's interpretation by adding, “Yes, it is our administrative failings that expose us to the fate promised by Allah.”

For believers, this is a serious but frank admission by Mahmood Zudhi. It is thus a direct advice to the tahfiz school sector not to ignore the safety standards that secular authorities have worked out carefully over the years globally, and which those safety authorities willingly share with Malaysia in the name of humanity.

The other message implicit in such a frank confession is Jangan Jadi Sombong, Muslims can learn from secular authorities on public health and safety.

The authorities should now register all tahfiz schools, ensure they comply with occupational, health and safety regulations, if possible grade their educational (teachers) and facilities to advise parents, and audit same at regular periodic intervals.

No one is prohibiting their existence but the safety of the children must be a combined government and public responsibility.