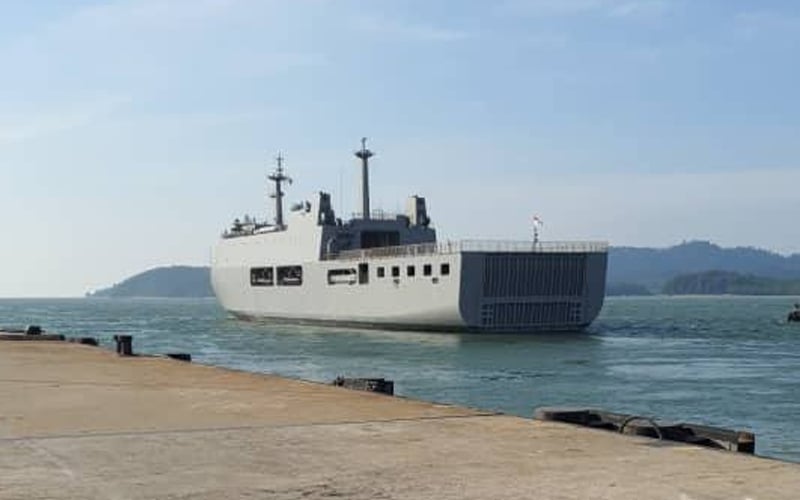 One of the three Myanmar navy ships leaving the Lumut naval base with the deported undocumented migrants. (Facebook pic)

PETALING JAYA: Despite a court order to stop the government from deporting 1,200 Myanmar refugees and asylum-seekers back to their homeland, Malaysia has repatriated more than 1,000 undocumented migrants today.

A statement on the immigration department’s Facebook page said 1,086 Myanmar nationals were repatriated via three Myanmar navy ships from the Lumut naval base in Perak.

“The immigration department would like to thank all parties for their cooperation in making this repatriation program a success,” said Immigration director-general Khairul Dzaimee Daud.

“The immigration department would like to stress that all the detainees deported were undocumented migrants from Myanmar and not from the Rohingya ethnic group or asylum seekers.

“All those deported agreed to return voluntarily without coercion by any parties,” he added.

Earlier today, FMT reported that the Myanmar nationals were given a reprieve at least until 10am tomorrow by the Kuala Lumpur High Court when the leave hearing was to be heard.

The court granted an interim stay to stop the government from going ahead with the deportations.

Refugee groups, which had made the application to the court, said asylum seekers from the minority Chin, Kachin and non-Rohingya Muslim communities fleeing conflict and persecution at home were among those deported.

Malaysia has said it would not deport Rohingya Muslims or refugees registered with the UNHCR, but the UN refugee agency said there were at least six people registered with it that were set to be deported – adding that the figure could be more.

It has not been allowed access to the deportees.

Amnesty Malaysia director Katrina Maliamauv yesterday warned that the deportations would put the individuals at risk of “further persecution, violence and even death”.
Posted by KTemoc at 7:23 pm