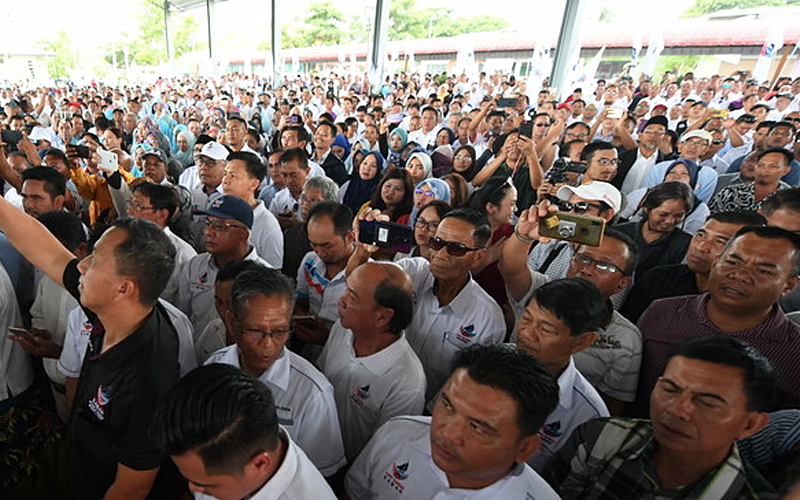 Parties in Sabah and Sarawak are being wooed for support ahead of the next general election. (Bernama pic)

PETALING JAYA: Three main Peninsula-based coalitions are trying to cosy up to political parties in Sabah and Sarawak as they prepare for the next general election (GE15) but Barisan Nasional has the best chance to woo them, says an analyst.

Among the disappointments faced by Sarawak, he said, were the cancellation of three bridge projects in Batang Lupar, Igan and Rambungan which had been awarded by the BN administration before GE14.

Sarawak also resented being told to repay its RM2.5 billion debt to the federal government in a dispute over RM2.7 million in state tourism tax revenue.

“Under PH, the Sarawak government was also told that the state would go bankrupt in three years if it is ruled by Gabungan Parti Sarawak (GPS),” he told FMT.

Awang Azman said the people of Sarawak “still remember this and their sentiments towards PH is still hostile” and they may vote for Barisan Nasional or Perikatan Nasional (PN).

Even though the ideology of GPS was different from PN, he said Sarawak collected RM3.09 billion from the 5% state sales tax (SST) on petroleum products under PN administration.

“There’s no reason for them to reject PN even if the ideology is different,” he added.

However, he said the people in Sarawak were comfortable with BN as they have dealt with the coalition in the past. For them, it was all about which coalition would give them more autonomy and development expenditure, he said.

In Sabah, the main opposition party, Warisan has a “personal relationship” with Dr Mahathir Mohamad and was likely to throw its lot with the Pejuang leader.

Umno and PPBM, he said, are still trying to keep a cordial relationship despite tensions over the chief minister’s post last year.

Two days ago, Umno president Ahmad Zahid Hamidi told party members in Sabah to set aside any animosity with its partners in Gabungan Rakyat Sabah (GRS) and to continue strengthening the coalition government.

Waiting to see what happens in the Peninsula

A Barisan Nasional member told FMT that most of the political parties in the Borneo states are playing a “wait and see” attitude.

“They are waiting to see what will happen next in the Peninsula,” he said.

Among the issues they are monitoring are: if PAS will join PPBM after the elections, or will BN work with PH after GE; or will BN tie up with PAS in Muafakat Nasional.

“They are weighing in to see who will be the best bet to seal a deal with,” he added.

The BN member said the Borneo state parties are aware that they are the kingmakers in the coming GE as no coalition in the peninsula is likely to win a strong majority.

“All three – PH, BN and PN – cannot run the country on their own. They won’t have the majority. The parties on the other side of the South China Sea are waiting for some developments.

“They do not want to be caught in a situation where they seal a deal with one coalition and someone else wins,” he added.

The PH member said they may not stand a good chance as compared to BN in Sabah and Sarawak due to the past track record but will have a better chance than PN. “Talk from the ground is that the political parties are not sure if PN will survive the elections. PN is still seen as a weak coalition in Borneo states,” he added.
Posted by KTemoc at 6:27 pm