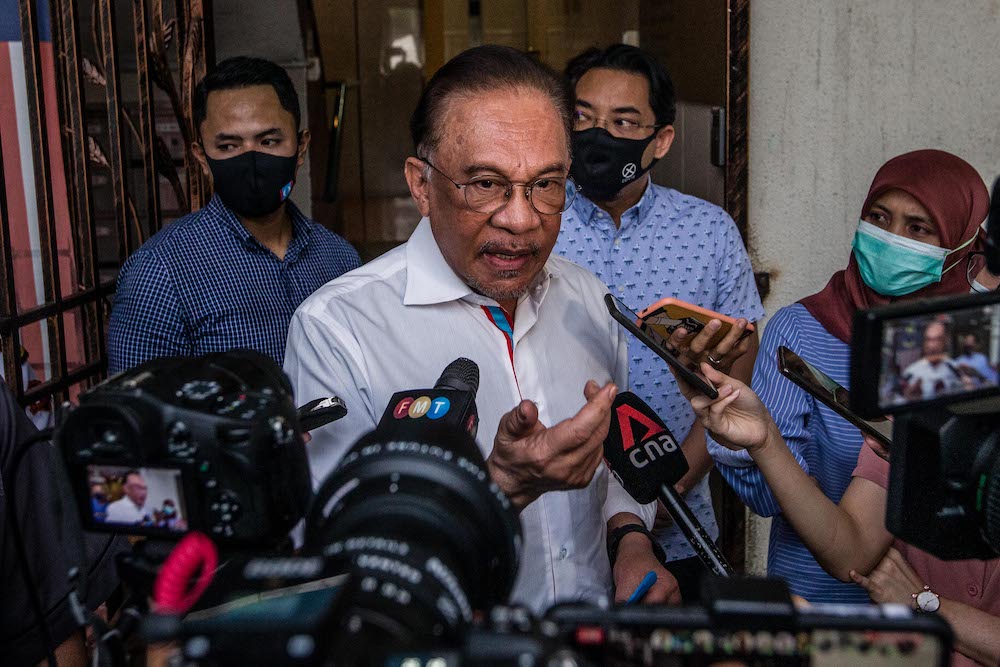 Datuk Seri Anwar Ibrahim said that in the short time that PN has been in power, there appears to be a consistent assault on free expression and free press. — Picture by Firdaus Latif

In a statement today, Anwar recalled that only in the short period of time that PN has been in power, there appears to be a consistent assault on free expression and free press, including purported investigations and harassment of journalists, civil society leaders, members of Parliament, and now independent publishing houses.

“A government that is confident in its legitimacy would find no need to censor what is reported.

“What we see instead are actions by a fragile government which is diligently pursuing measures to hide its actions from the public and avoid accountability in the form of the Emergency Ordinance, suspension of Parliament and a sustained assault on the free and independent press,” Anwar said.

In his statement, Anwar cited the Federal Court’s ruling against Malaysiakini for contempt of court as well as the exorbitant fine levied against it today.

At the same time, he reminded the government of the police raid on local publisher Gerakbudaya and confiscation of some of its computers, which also took place today.

“Freedom of expression is a vital pillar of the healthy functioning of a democratic government.

“All branches of government are duty bound to preserve and protect the freedom of expression as enshrined in Article 10 of the Federal Constitution.

“In matters related to contempt of court and sub judice, we agree with the Bar Council’s position that there must be a balance struck between preservation of the freedom of expression and the sound administration of justice,” he added.

As a seasoned politician, Anwar claimed that this tactic has been utilised by oppressive governments around the world and yet another indication that Malaysia is on the slippery slope towards authoritarianism.

“These actions will serve to further erode confidence in the rule of law in Malaysia and accelerate the rapid exodus of investment from the country,” he said.

Earlier today, the Federal Court today sentenced Malaysiakini’s operator Mkini Dot Com Sdn Bhd to a fine of RM500,000 for contempt over its facilitation of five readers’ remarks against the judiciary on the news portal’s website.

Court of Appeal president Tan Sri Rohana Yusuf delivered the decision by the panel of seven judges for the fine of RM500,000 to be paid within three days from Monday.

The Federal Court however said its editor-in-chief Steven Gan was not in contempt.
Posted by KTemoc at 9:59 pm