Islam and the State - individual freedoms or imposition of rules? 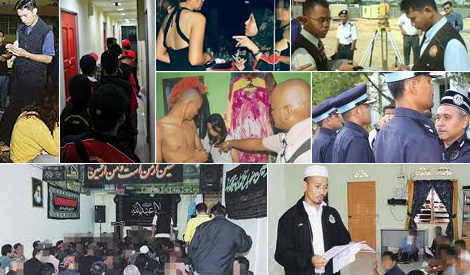 Islam and the State - individual freedoms or imposition of rules?

COMMENT | On Friday, Feb 5, 2021, it was reported that a Malaysian woman won an appeal at the Federal Court to assert her identity as being not a Muslim. The circumstances were that she was born to a Muslim father and a Buddhist mother, but they weren’t married, and she had shown evidence that she was not born and raised as a Muslim.

Among the means and ways that she had to prove her status, she showed that the Islamic religious authorities in 11 states and the Federal Territories do not have any documents of her mother’s conversion to Islam nor her biological parents’ Muslim marriage. Additionally, she had her late mother’s statutory declaration, that she was not married to the biological father when she gave birth to her daughter.

There are many legal considerations to be discussed here but for now, let’s home in on the reality that we know of Malaysia when it comes to Islam.

Article 11 of our Federal Constitution guarantees the freedom of religion for all Malaysians. But, if you are born into a Muslim family or decide to convert from Islam to another faith, you are not free to leave, even though you no longer believe and want to choose another religion for yourself.

The consequences of wanting to exercise this right to freedom of religion entail processes that are unknown. From previous cases that we know from the media, it would involve significant time and money. Worse still, attempts to do so will draw the ire of people from within the community who don’t believe that freedom to leave Islam is a right.

Generally, the Muslim community and state religious authorities in Malaysia are not empathetic nor compassionate with people who decide to leave Islam, especially if they were born Muslims. Additionally, there is also a very high intolerance for Muslims taking part in non-Muslim cultural ceremonies, even if one has not left the religion. In December 2020, the religious authorities in Johor were adamant about questioning the religious status of Illi Najwa Saddique who married Manpreet Singh, the captain of the national Indian hockey team.

It seems that the status of her faith and marriage is a matter that warranted the serious attention of not only the public but also the state religious authorities and individuals in political parties, even if she lives in another country.

Another recent issue that cropped up was that of combining conversion with charity work.

Since the movement control order (and its various permutations) was implemented in March last year, there have been countless concerned individuals and groups who have reached out and provided necessary supplies to communities severely affected by the pandemic.

Ebit Lew, a well-loved and charismatic public figure, has done the same and had gone into remote communities to give aid and support. He has been rightly applauded for this, but in a few instances, this went beyond distributing provisions. What took place was mass public conversions of some of these communities to Islam that drew both awe and shock to the rest of us.

While this may not be new because we have heard before about indigenous peoples being converted to Islam, we haven’t fully understood the impact and effect of these conversions on such severely marginalised communities.

Were they adequately briefed about the religion and what the practice of the faith entails? Were there community and social traditions and practices that they would have to reconsider? What happens after the conversion? Will they be issued with identity cards indicating ‘Islam’ as their religion?

Who is responsible for guiding and supporting them following their conversions? Regulations and enactments of the faith would probably be challenging to implement due to their remoteness. Still, individuals acting in their consciousness may not have the means and resources to defend themselves and assert their fundamental rights in court, especially if state and religious authorities are involved.

What is very clear in today's Malaysia is that the decision to convert into Islam and the act of converting other people into Islam is a grave matter and shouldn’t be taken lightly.

While many choose to convert to Islam, it is undeniable that some convert to marry their choice of a life partner who is a Muslim. A mixed-religious marriage is not an option in Malaysia when one’s partner is a Muslim. Many may still decide to proceed with the relationship and choose Islam as their faith and practice in that marriage. It is also likely that some go ahead with the conversion anyway because they don’t find it entirely objectionable.

The notion is that the faith and practice of that faith is a journey you take with your loved ones and that you would be guided and supported by the family and community around you. While this may sound clear and simple, ultimately, in Malaysia, conversion to Islam is not just about believing in the Oneness of God and that Prophet Muhammad PBUH is the Messenger and that you will practice and abide by the pillars of the faith.

In Malaysia, it also means that you subject yourself along with other Malaysian Muslims to be regulated by the current and developing religious enactments that go beyond your daily life with your family.

This encompasses the regulation of how you practice or don’t practise Islam in private and in public. The regulation of who would be able to inherit, or not, and how much, of your estate upon your demise. The knowledge that your expressions and thoughts to discuss critically and debate publicly about the religion and its institutional and individual authorities comes at a cost, either socially or legally. As it is, comments that are deemed as insults to the prophet on social media, ignorant as they may be, are already heavily punishable under federal law, even if you are not a Muslim.

When you pass on, even if you didn’t practice Islam and revert to your previous faith, or move on to another without being declared as no longer a Muslim, religious authorities may put up a fight with your family and community to bury you as a Muslim.

These are but some of the realities that your average Malaysian Muslims don’t tell you because we’ve lived with it all our lives and don’t know any other alternatives. Religious authorities and political parties are not encouraging us to explore and discuss openly what options there can be.

But we should not let this discourage us. There is room for the public to debate and discuss this further. Questioning these realities and their implications on individual choices and freedoms shouldn’t be regarded as questioning the faith itself, because Islam is more than these regulations and enactments.


ROZANA ISA is the executive director of Sisters in Islam.
Posted by KTemoc at 6:19 pm