The Bukit Gelugor MP condemned the fugitive murder convict for his purported “offer” as reported by the Malaysiakini news portal, saying it demonstrated Sirul’s lack of remorse for killing the Mongolian model.


Among others, he pointed out that Sirul has previously attested to killing others besides Altantuya on orders, saying this showed the Mongolian was clearly not his only victim.

The lawyer suggested that it would be better for Putrajaya to assure Canberra that Sirul would not be put to death here over the murder conviction, noting that the only obstacle to extraditing him was his capital punishment here for killing Altantuya.

“If the said death penalty is commuted to life imprisonment, the Australian government will most certainly deport him to Malaysia to serve his sentence here,” he said in a statement.

He said Sirul could be “compelled” to share the information he claims to know, once he is back in Malaysia.

Ramkarpal also expressed doubt over how much Sirul knew of the events leading to murder, suggesting that a former aide-de-camp to Datuk Seri Najib Razak by the name of Musa Safri would be a more credible source of the information.

“The fact remains that Sirul and Azilah murdered Altantuya in the most grotesque of circumstances,” Ramkarpal said.

“As such, Sirul is certainly in no position to bargain his way out of paying for such a tragedy and he must be deported to Malaysia in the manner suggested above to once and for all put a close to the mystery of who ordered the murder of Altantuya Shaariibuu.”

In 2008, police commandos Sirul and Azilah Hadri were charged with murdering Altantuya and subsequently convicted by the High Court in 2009.

In 2013, the appellate court had acquitted both men, but the Federal Court reversed the acquittal last January and sentenced both to death.

Sirul fled the country for Australia prior to the Federal Court decision and remains in custody there.

Altantuya had been linked to Abdul Razak Baginda, a former Najib aide who brokered the deal for Malaysia to buy two Scorpene-class submarines from French defence firm DCNS while Najib was defence minister.

Kaytee's note: Why are we focusing only on Sirul when his partner in crime, Azilah Hadri, is here, in a Malaysian prison? 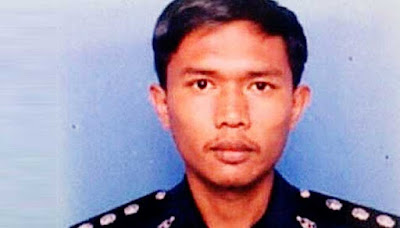 Are those like Mahfuz Omar and Mahathir preferring Sirul to Azilah Hadri because thus far the latter, already imprisoned here, is not singing as well as we would like him to sing?

Be that as it may, once again it's thanks to Ramkarpal Singh, son of Karpal Singh and brother of Sangeet Kaur, who like his dad and sis holds on to principles and due process of law.

In an earlier post He would, wouldn't he! I wrote of Sirul:

........ in an interview with Malaysiakini [he said] he is willing to assist the new Pakatan Harapan government to reveal what took place in the case.

He said on Saturday (May 19) that this is a condition for his release, as he feels that many people now (after GE14) see him as a political detainee.
"That case is my only (alleged) crime, as I do not have any criminal record prior to that. Hence, I am willing to assist the new government to tell what actually transpired provided that the government grants me (a) full pardon," said Sirul.

He is currently detained at an immigration detention centre in Sydney, Australia.

“I had previously served under Dr Mahathir Mohamad and Anwar Ibrahim, and I would also like to use this opportunity to congratulate them on their victory in the polls and thank Anwar for calling for a fresh trial" added Sirul.

What a clever definition, wakakaka. But we need to remember, he and his partner physically murdered a woman and then blasted her body to smithereens.

But Sirul sure knows how to speak up and play the game, compared to his partner who was an officer.

It's likely Sirul may get what he wants, as he's now a wonderful means to a desired "end", even if he is a murderer convicted of the death sentence.

Sirul has already been pronounced as 'innocent' by some Malaysians, and soon he may even be called a Malaysian 'Hero', wakakaka.

And we may wonder why Anwar has called for a re-trial for Sirul? Why not for Azilah also?

But I am glad that Ramkarpal reminded us that Sirul himself confessed he had executed others before Altnatuyaa. The cruel murder of the Mongolian model was NOT his first or only crime.

Indeed, based on Sirul's own confession, he has been a professional killer-assassin.

We sure have moronic gullible guppies in Malaysia who could even see Sirul as innocent. In their Hell-Hounds' obsession to nail Najib and wife as the murderers they were even willing to close one eye to Sirul's murder of Altnatuyaa

It proves their hypocritical interest in the Altantuyaa case has been really a vile vicious politicised interest rather than about a crime.