Perlis has a monumental problem with its selection of a MB following GE14. 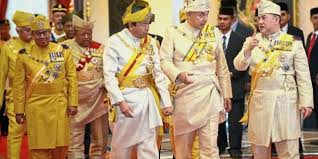 Not too long ago, Pahang also had a delay in the Regent approving the BN appointed MB but for a different reason - because HRH wanted time to get to know the MB and exco better. I have never heard of such a reason nor do I believe the Regent of Pahang has such a constitutional right.

Both Perlis and Pahang are coincidentally BN controlled states.

But to show that the issue is not so much in the politics of the party which controls the states, Selangor, a Pakatan ruling state, has an even more bizarre problem.

Its outgoing MB Azmin Ali is supposed to/has vacated his MB position to take up a federal appointment as the new Economics Minister, but he has no replacement for a few more weeks. Why?

The three states are obviously Sultanate states where in each, the ruler (or regent) has been the apparent cause of the delay in appointing a new MB, or in the case of Selangor, as so claimed by Azmin Ali.

Now, why is the PM who has been renowned for his royal dentistry (to wit, de-fanging awkward sultans, wakakaka) and/or Pakatan (so fond of correct due process) keeping quiet in the face of such constitutional irregularities and/or defiance by royals?

Time to crack the constitutional whip.