With logic like Annuar Musa's, who needs spin doctors? 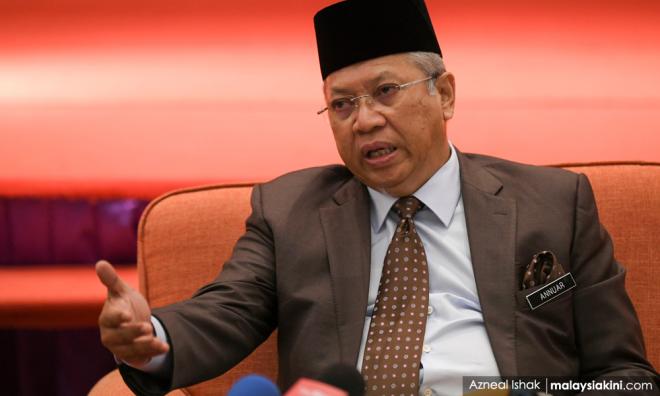 With logic like Annuar Musa's, who needs spin doctors?

COMMENT | When Mahiaddin aka Muhyiddin Yassin, surrounds himself with idiots, then however daft or incompetent he is, he will end up looking like the smartest man in the cabinet, possibly in all Putrajaya.

Otherwise, why would Mahiaddin choose Annuar Musa as his Federal Territories Minister? You and I would not entrust any of these Perikatan Nasional (PN) politicians to run a pisang goreng stall.

We have seen the performance of Umno-Baru politicians over the past few decades and we know not to elect Mahiaddin as PM, or minister, and would not give him a second glance even when judging a nasi lemak competition.

However, as a result of one man giving Mahiaddin the mandate to rule, we are now saddled with the problems created by these clueless Putrajaya behemoths.

At a forum organised by Harakah Daily on June 23, Annuar gave a few reasons why some Malaysians flouted the rules governing the coronavirus lockdown. It is amazing how one forum has managed to expose the sheer hypocrisy and stupidity of the PN cabinet.

Annuar said rakyat was not afraid of contracting the disease. He claimed that some Malaysians did not consider the coronavirus to be an outbreak.

More importantly, Annuar claimed that Malaysians believed that the PN administration had successfully controlled the disease and the pandemic.

By Annuar's logic, convicts like Najib Abdul Razak must be innocent, because, despite his conviction, Najib roams the countryside like a free man who has committed no crime.

By Annuar's logic, he and his fellow peers would probably think that politicians who jump from one political party to another, are an indication that democracy is alive and thriving in Malaysia.

By Annuar's logic, a man who marries four women, whether or not he gives each wife equal treatment or that he can support them, is a prime example of a man who is religiously following the tenets of Islam.

By Annuar's logic, a Muslim man who marries an underage girl is observing one of his religious obligations, although you and I may call him a paedophile. By Annuar's logic, the forests of Malaysia are ripe for plunder because, for him and people of his ilk, the jungles only contain 100-year-old trees, dense vegetation, clear waterways, wildlife, and a group of people he thinks are not as knowledgeable as him.

By Annuar's logic, less-deserving students who have been offered scholarships to study overseas are not because a quota for Malays has to be filled, or that these students have 'kabel ke atas' (politically well-connected).

The mass production of thousands of PhD graduates like a factory assembly line is because the Malaysian government is more interested in quantity, not quality, but Annuar would probably disagree.

Annuar is adamant that PN's successful handling of the pandemic has made the people flout the rules; however, he failed to mention the two standards in governance. One for ministers and celebrities, another for the rakyat.

Malaysians take their cue from the ministers and they will say, "If the minister and celebrity can flout the rules, so can I."

It started with Plantation Industries and Commodities Minister Mohd Khairuddin Aman Razali who failed to observe the strict SOP guidelines on his return from Turkey last July. Successive ministers broke the law but no minister has been sacked or relieved of his position. They still enjoy their high salaries and perks, they can travel overseas, on their return can quarantine in their own homes; but in the outside world, many companies have folded, many owners have sacked their workers or told them to take six months unpaid leave.

Nor did Annuar mention the failure of the PN administration to provide financial incentives for the poor and desperate families, and crucially, offer more aid to struggling companies.

Many people have been made homeless because they are unable to pay their house rent, more have returned to live with their parents in the rural areas, and many probably flout the rules, to find jobs to pay for food, and to survive. Many have already used up their savings during the series of lockdowns over the past year.

What is Annuar's solution to the growing numbers of unemployed in Kuala Lumpur? Some people claim that contacting the welfare department for help was a futile effort.

Civil servants are working from home, and when they finally answer the phone, if at all, they say that not all the welfare services are available. If anecdotal evidence is to be believed, those who own a vehicle claim they are not eligible for help.

If Annuar is listening, will he comprehend that the deaths from the coronavirus will be nothing compared to those who will die from hunger and starvation once the worst of the pandemic is over?

Annuar and his aides cannot deny that many coronavirus clusters had their roots in political or religious gatherings: the Sabah state elections and tabligh events to name a few.

If flouting the rules is an indication of PN's successful management of this coronavirus crisis, how would Annuar define failure?

What do Annuar's peers think of him? As politics is also a game of party unity, I doubt we will ever know. If orgasms can be faked, so can party sincerity.

MARIAM MOKHTAR is a defender of the truth, the admiral-general of the Green Bean Army and president of the Perak Liberation Organisation (PLO). Blog, Twitter.
Posted by KTemoc at 8:22 pm