Not all who don’t want to be vaccinated against Covid-19 are anti-vaxxers, and why listening is the best way to get them to do so 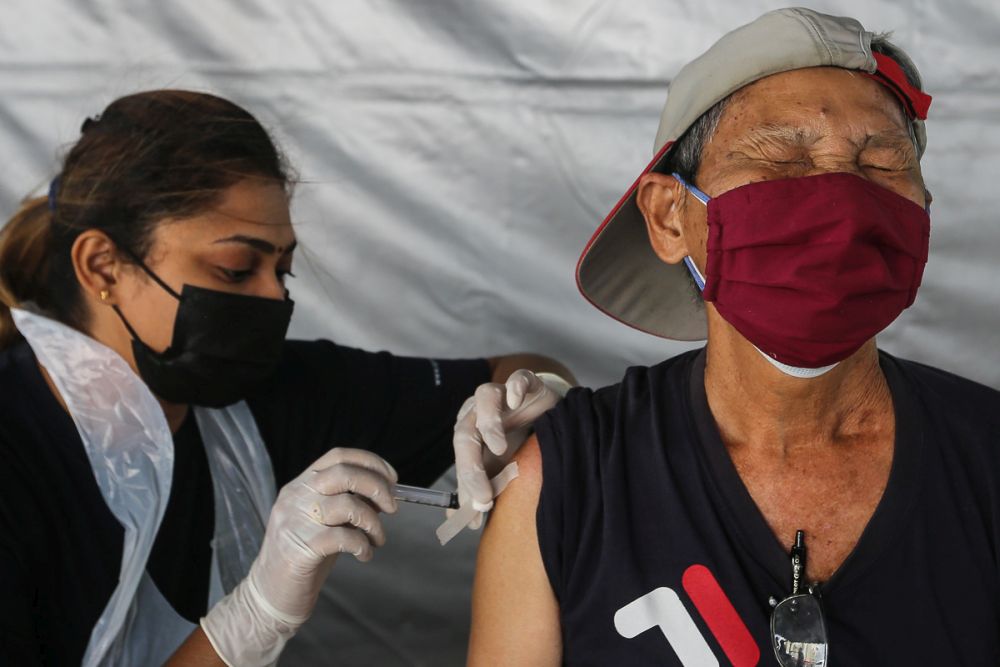 KUALA LUMPUR, June 22 — Mok Keng Yew, 76, said he has little to no qualms about getting vaccinated... but just don’t give him Pfizer.

His distrust of the vaccine made by the American pharmaceutical giant is driven by what’s inside it, or at least what he thinks is inside it.

Mok, a retiree, was told the Pfizer-BioNTech vaccine had synthetic components. Given his age, he said he feared it would have dangerous side effects that could kill him.

“I only trust the vaccines that are made like other vaccines such as AstraZeneca and Sinovac but not Pfizer which is synthetic,” he replied when asked about how he felt about Covid-19 vaccines.

“I don’t trust synthetic vaccines which stay in your body for life. You don’t know the effects it causes 20, 30 years later.”

As pandemic fatigue sets in and people are desperate to resume normal life, any signs of vaccine-wariness — even as harmless as asking about side-effects — are likely to be met with disdain.

To the many eager to get inoculated, Mok is likely to be called an “anti-vaxxer”, a name for those with a penchant for outlandish conspiracy theories and opposed to all forms of vaccination.

Yet Mok fits none of these descriptions.

Throughout his life, he has been vaccinated several times and agrees they’re necessary against diseases.

So he registered for AstraZeneca when the government offered those above 60 the opportunity to opt in for the vaccine last month. Mok got his first shot on June 10.

Then there is FL, 81, a retired civil servant who has many comorbidities and does not trust the government to administer vaccines.

So, in his case, it is not the vaccine he distrusts.

Quite a few of the above 60s who refuse to be vaccinated are simply fearful of side effects as they think they may actually get seriously ill or die from them.

“I’ve heard those who took Sinovac did not have side effects so I would prefer to have a choice. People told me AstraZeneca might cause blood clots so I don’t want it. I only trust vaccines from China,” said one 78-year-old woman who eventually agreed to register for vaccination as she hopes she will receive the Sinovac vaccine.

Despite efforts to ramp up vaccinations in the country, only over 13.5 million people have signed up for the national immunisation programme, still less than half of the country’s 33 million population.

The Covid-19 Immunisation Task Force (CITF) had initially aimed for herd immunity by the first quarter of 2022, but later expressed confidence that it could be achieved by December 2021 given the increasing rate of shots it has administered to date, now reaching over 200,000 daily. 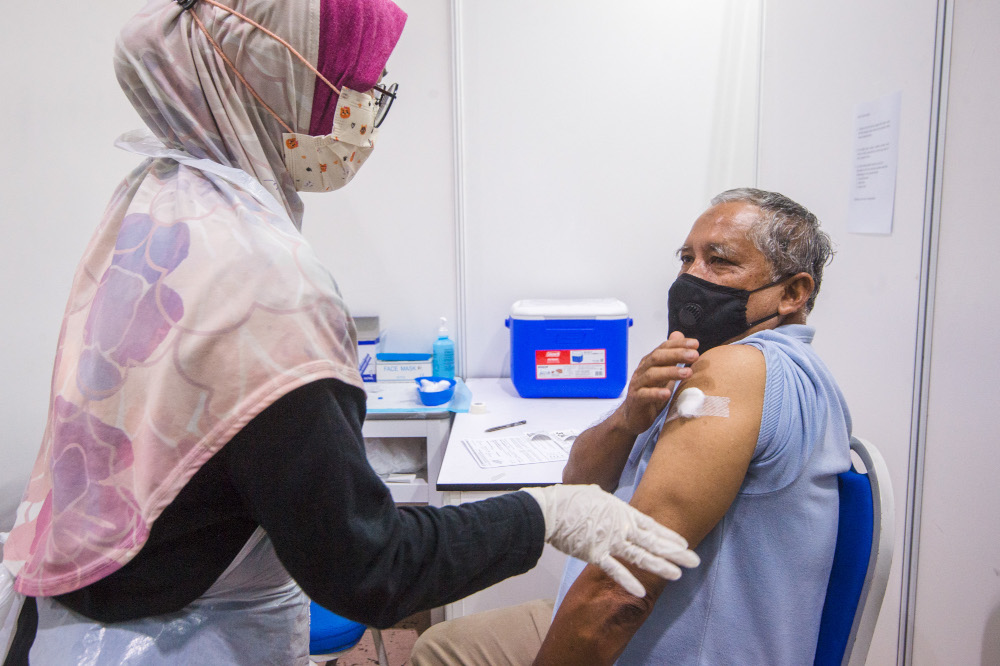 But there is mounting concern that the low rate of vaccination sign-up could hinder progress, and fuel doubt that the government could meet its target even by February next year.

Some government leaders like Home Minister Datuk Seri Hamzah Zainuddin believe anti-vaxxers could be among the main factors causing the poor registration rate, prompting talks of coming down hard on those found speaking against vaccination.

Hamzah had suggested using sedition laws against them.

But some experts believe such punitive measures could be counterproductive, more so when the authorities are still unable to differentiate those who totally oppose vaccination and people like Mok and others who are not necessarily against vaccines but are hesitant for various reasons.

This makes recognising and acknowledging the distinction between the two groups paramount if the government wants to have a chance at persuading them to get their shots, according to Zeti Azreen Ahmad, an assistant professor with the International Islamic University Malaysia’s department of communication.

Understanding that they are not homogenous would be the first step, she suggested, because “we understand there are distinct ways to communicate with different sets of people, which is far more effective than being dismissive or resorting to stereotyping.”

“The goal of communication is not only to educate the ‘hesitant’ or to debunk misconceptions but also to strengthen resilience among those who have a positive view of vaccination against the opposite messages,” she told Malay Mail.

“Those who hold a positive view should be given constant updates on the benefits of vaccination; how it could protect them and others. In addition, people who are unable to decide need to be convinced too,” she added.

“Thus, information needs to be repeated using multiple media platforms to reach these diverse groups. I think it is important to listen and understand why such hesitation develops in the very first place.”

But accounts from people who have tried to engage with those who occupy the extreme end of the vaccine-hesitancy spectrum suggest employing science-based information has produced little to no effect.

In Malaysia, extreme anti-vaccine groups have grown considerably strong thanks to social media, a platform that has given them unprecedented reach to a wider audience.

The Ministry of Health had suggested these groups were responsible for the 340 per cent rise of measles cases among children in 2016, likely caused by worried parents refusing to vaccinate their children.

One theory public health experts have used to explain this is the high number of anti-vaccine individuals who come from a highly-paid professional class, who are already influential in their own right.

They include engineers, lawyers and even medical doctors.

Chen, an articulate 63-year-old retired engineer educated in the United Kingdom, is very personable. Not your stereotypical idea of an anti-vaxxer.

He believes vaccines were initially innocuous and intended to prevent diseases, but later became part of a nefarious plot by Big Pharma to maximise profit, and a way for powerful dark political forces to control the world.

Still, at the heart of his distrust is concern about side-effects.

The mounting criticism of the government’s handling of the pandemic has also fueled his suspicion of public institutions that he thinks are complicit in trying to hide facts about Covid-19.

“The Malaysian experts are good at reporting on daily ever changing figures of infections, deaths, contact tracing apps, PCR testing and SOPs,” he explained.

“However, we as real Malaysians know of the civil servants' laid back, lazy attitude and know that they would never be able to collect and update daily data of infections, deaths.”

Chen said he now relies on known far-right websites like Brighteon for information about vaccines, and people like Dr Judy Mikovits, Dr Lee Merritt, and Dr Christiane Northrup, medical doctors have been accused of promoting pseudoscience.

Communicating with people like Chen can be tough but experts say it’s still important to acknowledge and try to understand where they’re coming from.

For example, Chen’s theory about Big Pharma may not be entirely accurate but it’s not completely false either given the longstanding and unresolved allegations that have been leveled against pharmaceutical companies in the past.

Dr Chua Sook Ning, a psychologist with Relate Malaysia, suggests finding a “middle ground.” This could entail agreeing that we do not know everything and that it’s okay for us to be anxious.

“The more we take the conversation away from the points of disagreement to points of agreement and figure out a way to have a mutual goal and work towards it, it'll be a better conversation,” she said.
Posted by KTemoc at 10:10 am