Thai Sex Workers protest: ‘No money, no honey, no GDP’

‘No money, no honey, no GDP’: Sex workers in Thailand use panties, high heels to protest Covid-19 shutdown 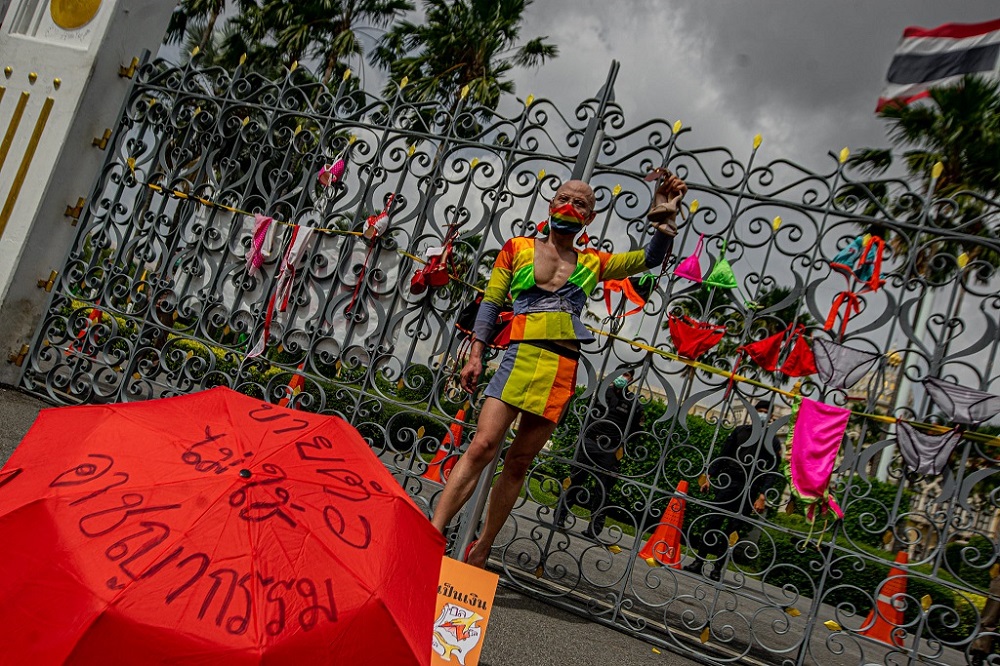 A protester stands in front of Thailand’s Government House demanding for compensation during Covid-19 closures. ― Picture via Facebook/iLaw

KUALA LUMPUR, June 30 ― Sex workers in Thailand have resorted to tying their undergarments and displaying their high heels as a sign of protest outside the country’s Government House.

On top of securing their bras and panties on the building’s gate, some wore aprons that featured a bikini print over their regular clothes.

Next to pairs of arranged heels, a sign read, “no money, no honey, no GDP”.

The protest comes after massage parlours, go-go bars and karaoke joints have been ordered shut for months amid the Covid-19 pandemic. Entertainment venues and massage parlours have been forced to shutter since April due to the pandemic. ― Picture via Twitter/@SekSamyan

Due to the loss of income, the protesters are now asking for a monthly reimbursement of THB5,000 (RM650) per person from the government.

Sirisak Chaited, one of the protesters and LGBT+ activist who made headlines for spearheading a gender-inclusive monkhood campaign said the Thai government needs to treat sex workers just like any other profession.

He added that these workers deserve government compensation, especially during tough times.

A vital industry for the country’s economy, Thailand’s sex trade generates large sums of money that is estimated to be worth billions of dollars and attracts foreign tourists.

“We’re Thai people and we generate income for the country.

“Please accept the reality that prostitution exists and it does have value and dignity just like other professions,” Sirisak said.

As part of Thailand’s Covid-19 standard operating procedure, prostitution is currently punishable with up to two years imprisonment and/or a fine of THB40,000.

“We work with our bodies, just like many other people out there.

“But the government doesn’t even see us as human,” another protester said.

According to Sirisak, many who offered their services online found that it wasn’t a viable solution for them as it allowed them to be tracked easily and risk being arrested.

The peaceful protest yesterday was interrupted by the police who instructed protesters to take down the “inappropriate” clothing items.

One sex worker told a police officer: “These are our working clothes.”

“There are more urgent things that are inappropriate and need to be fixed.”

Since a third wave that swept across Bangkok in April, entertainment venues and massage parlours have been forced to shutter to curb the virus from spreading.

For now, it remains unlikely that nightlife venues will be allowed to reopen and resume operations.