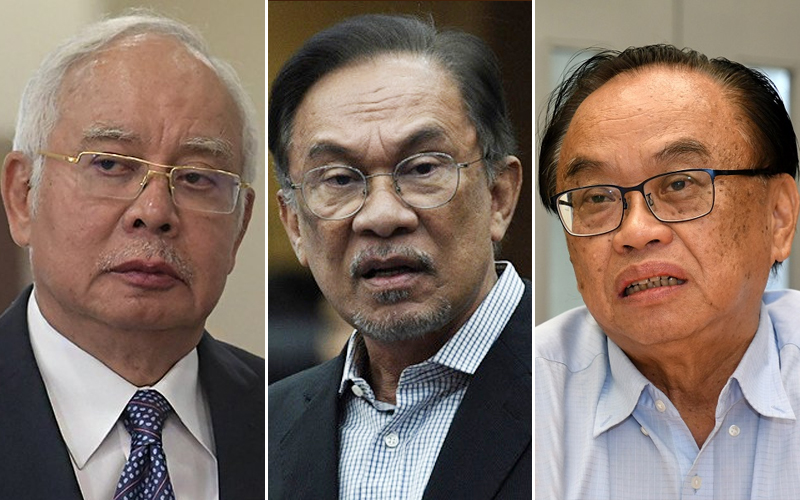 Former Umno president Najib Razak, PKR president Anwar Ibrahim and DAP’s Fong Kui Lim all feel that there is no need for any more delay in reconvening Parliament.

PETALING JAYA: Former prime minister Najib Razak has warned the government that it will be looking at a red card unless it reconvenes Parliament promptly, as MPs from both sides piled on the pressure to have a Dewan Rakyat sitting.

Commenting on a reminder by the Yang di-Pertuan Agong, Sultan Abdullah Sultan Ahmad Shah earlier today, who reiterated his stand that Parliament needs to reconvene as soon as possible, Najib said a sitting would allow the emergency ordinances gazetted by the government over the past few months to be debated, voted and approved.

“Don’t let the red card come out,” he said, using a football analogy.

Meanwhile, opposition leader Anwar Ibrahim pointed out that this was the third time the King has put forward his stance regarding the sitting of Parliament.

“I hope there will be no more excuses and other interpretations from the minister. Stop fooling the rakyat,” said the PKR president on Facebook.

Although Anwar did not mention who he was referring to, he likely meant law minister Takiyuddin Hassan who has said the Yang di-Pertuan Agong did not set a firm date when he decreed on June 16 that Parliament should reconvene as soon as possible. The PAS secretary-general is being investigated by police for that statement.

“Those who are smart don’t twist words and directives and know the meaning of ‘as soon as possible’. Don’t be haughty, proud or rude,” Anwar said.

“The speaker shouldn’t act so smart as if he is the only one who knows all the rules. He just started in Parliament anyway. If the government doesn’t want to reconvene Parliament for whatever reason, the Prime Minister should just resign now,” he said.

The June 16 statement by Istana Negara said the King wanted Parliament to be reconvened as soon as possible to allow for the emergency ordinances and national recovery plan to be debated by MPs.

Istana Negara also issued a statement on Feb 24 stating that the King declared that Parliament can convene during the emergency on a date that the Ruler deems suitable, on the advice of the prime minister.

Today’s statement from Istana Negara came after Dewan Rakyat speaker Azhar Azizan Harun, his deputies Azalina Othman Said and Rashid Hasnon, as well as Senate president Rais Yatim and his deputy Mohamad Ali Mohamad, were summoned to the Palace for an audience with the King this morning.

Apart from stating that Parliament needs to reconvene as soon as possible, the Comptroller of the Royal Household Ahmad Fadil Shamsuddin said today the King was also of the view that all parliamentary select committees should resume their meetings to ensure transparency, integrity and accountability in government.

Umno vice-president Khaled Nordin said it was now up to the people to evaluate the current government.

“They are still playing deaf and dumb,” he told FMT in a text.

Meanwhile, Bukit Bintang MP Fong Kui Lun said the government should respect the King’s decrees and “not keep ignoring them”.

“Although he previously said as soon as possible, July would be better as opposed to waiting until August,” said the DAP lawmaker.

Last week, Azhar and Rais proposed that a special sitting of Parliament be held in early August to discuss how a hybrid parliamentary session (partly online and partly in person) could take place.

They said the special sitting could discuss amendments to Standing Orders enabling such a hybrid meeting, after which proceedings could be held by the end of August or early September.
Posted by KTemoc at 5:10 pm