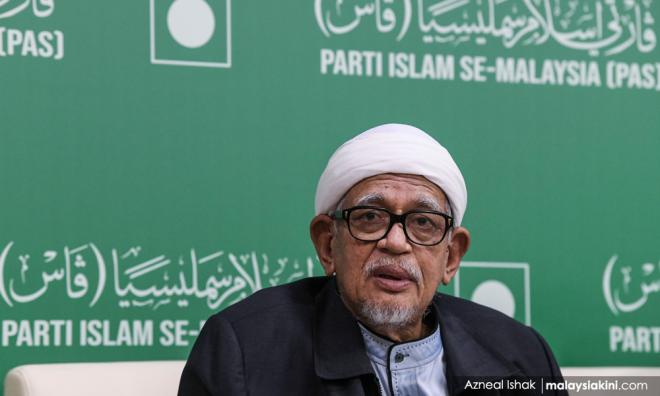 "Liberal ideology which moves in the name of press freedom, practised by Western societies, have incapacitated humanity. We cannot allow them to corrupt our society, which believes in religion."
- PAS president Abdul Hadi Awang
COMMENT | What people do not realise is that when they hurl invectives against this latest thing that PAS president Abdul Hadi Awang said, they are merely playing into established narratives that sustain a corrupt political class.

And when I say political class, I mean the political establishment which includes Pakatan Harapan. Hadi’s warning to young Muslims not to be fooled a second time by Harapan is exactly the kind of statement that elicits condemnation but misses the point when it comes to Islam in this country.

Looking back, the defensiveness of opposition politics when it comes to issues of race and religion in this country that are not mutually exclusive can best be summed up when Hindraf demanded that UiTM be open to marginalised Indians.

Bersatu Youth education bureau head Mohd Ashraf Mustaqim Badrul Munir spoke about the “Tiang Seri'' which is the most concise definition of supremacy I have read.

The "tiang seri" is the main pillar of traditional Malay houses. Ashraf said, "Don't touch the 'tiang seri' because (the house) will collapse if it is disturbed. The responsibility to take care of this house does not fall on the Malays and bumiputera alone.

"Chinese, Indians, Sikhs (and others) have a responsibility to maintain the 'tiang seri' to ensure we stay united under the spirit of harmony."

Lim Kit Siang is someone I can actually make the argument that he spent decades attempting to save the country while nobody listened. But when this grand old man of oppositional politics writes a piece that the DAP supports Islamisation based on the Constitution, it merely plays into the narratives, schemes, machinations and agendas of those who support racial and religious supremacy.

Folks find it easier to vilify Hadi than to question the Islamic narratives of Harapan when they were in power. Hadi, of course, is wrong when he reminds young Muslims not to be fooled by Harapan because they supposedly lacked Islamic "credentials".

Harapan’s religious czar Mujahid Yusof Rawa, for instance, made false equivalencies between “liberal” and religious extremists. Harapan made it a mission to curtail free speech, especially when it came to “insults to Islam”. There were syariah-compliant policies mooted. Funding for the religious bureaucracy went up. All the while, secular voices attempted not to spook the Malays.

Someone like Zakir Naik, who claimed that it was better for Muslims to vote for corrupt Muslim politicians than honest non-Muslims was courted and all the while he was waging war on the secular values and personalities of this country. Indeed, religious operatives parroted the teachings of Zakir to justify all manner of anti-democratic policies and religious bigotry. When Harapan was in power, they did nothing to change the Islamic discourse in this country. Indeed, the affable religious czar Mujahid continued policies and dreamt up new ones - which were actually old ones - to project an image that Islam was “safe” in the hands of Harapan. Safe hands meant that liberal groups, women's groups, LGBTQ rights and the rights of religious minorities were subordinate to the diktats of the religion of the state.

Harapan uses religion just as much as the establishment. We are not dealing with competing ideas but an attempt to distract from the real issues by convincing ourselves that the magic bullet that destroys a kleptocracy means we will not turn into a theocratic state. Of course, now it looks like Harapan neither completely destroyed a kleptocracy nor held back the tide of Islamisation.

When I ask Harapan political operatives which is worse, as in which would be preferable to live under - a kleptocracy or an Islamic state as envisioned by PAS president Hadi and co - all I get are mumblings about how, if Islam is practised with empathy and consideration, it is a religion that can exist within the democratic process.

The Constitution, which for all intents is secular-leaning, has been co-opted by the state and Islamists to present a monolithic view of the Muslim community. If the Constitution is manipulated by a handful of people, then why isn’t another handful of people - and by people, I mean Muslims working in tandem with other secular-minded people - defending the Constitution and not engaging in the kind of political behaviour that many people claim is detrimental to the Malay community?

The reason why this country has been able to maintain the facade of being a “moderate” Islamic country is the existence of urban demographics and policies that enabled relative economic success despite all the leakages. In other words, there was political will that this country would not turn into just another failed Islamic state.

I would argue, and have done so many times, that the only reason why Umno continues to make overtures to the non-Malay community is that it needs them as a fig leaf in its charade as a multiracial/multi-religious coalition and maybe to hedge its bets against the possibility of a sizable Malay revolt. Not to mention that the plum urban seats are the trough from which its cronies feed.

Now, of course, the split in the Malay community, the missteps of the opposition, and the machinations of Umno have resulted in the extreme fringe – the unthinking fringe – of the Malay right to come out with all sorts of remedies to “save” the Malay polity.

So you see, it is pointless to hurl invective against Hadi. In many ways, he is the most truthful Muslim political operative in this country. He and his coteries draw on the Islamic Holy Book to justify the most undemocratic of practices, extending it to even the excessive display of wealth by the party.

He is honest in his agenda of Malay and religious supremacy and his continued efforts to destabilise any secular agenda of this country. The real issue here is that there has never been any counter-narrative to Hadi.

Why do you think religious extremists fear progressive ideas “infecting” young people? More importantly, why is it that Harapan thinks the same way?