Siti Meriam, Mohd Khairi and their children had been eating plain fried rice and biscuits since the start of the pandemic. — Picture by Siti Meriam Mohamad

PETALING JAYA, June 29 — A Kelantan family-of-six, struggling to put food on the table, has received money, a grass cutter and food aid from members of the public.

Their story caught the attention of users on social media after a Facebook post saying that the family that stayed in Tumpat’s Kampung Genting only ate plain fried rice or biscuits as they did not have enough money to buy food.

In fact, there were times since the pandemic hit last year, when the parents had to starve just so they could give the food to their children.

According to the post, the husband Mohd Khairi, 33, works as a coconut plucker and would manually pull the grass using his own hands as he did not own a grass cutter machine.

Amid the Covid-19 pandemic, he has only been getting one request per week with a wage of RM50 to clean homes, climb coconut trees to pluck the fruit and cut the grass since the start of the pandemic last year.

His wife, Siti Meriam Mohamad, who used to make doughnuts and pau and sell them at stalls nearby now helps him collect coconuts as most of the stalls have shut down.

She also has an online cosmetic business but that has not been doing well with hardly any customers buying her products.

The couple has four children aged 12, nine, five and a nine-month old baby and the family-of-six stay in a dilapidated house paying a monthly rent of RM50.

Speaking to Malay Mail, Siti Meriam said that she was thankful and happy that many have come to their home yesterday to donate food items, bedding, and a grass cutter for her husband.

“There were many days where my husband and I would just starve but we make sure our children have their meals.

“Sometimes, neighbours would come and help us by giving us food but that’s not on a daily basis.

“Other days when we are desperate for food, I would help my husband to collect scrap metal and sell it to get money for our children,” she said.

She added that now her husband’s work would be much easier with the grass cutter as he doesn’t have to toil under the hot sun to pull out the grass and weeds.

Asked as to how their children are coping with online lessons, Siti Meriam said that three of her children would take turns using her smartphone for their lessons.

She added that with only one smartphone in the house, her children understand that life has not been easy and understand the struggles of her parents. 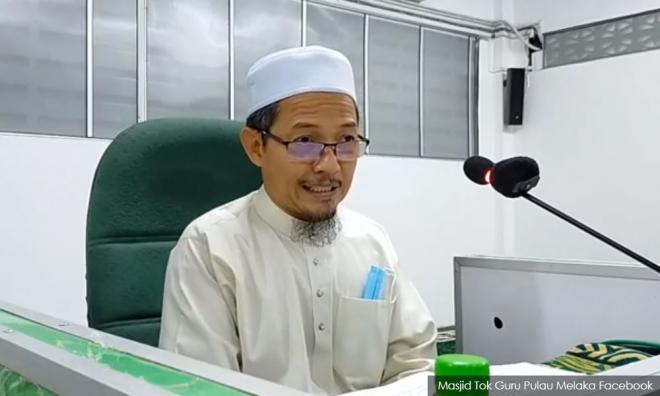 The people should not surrender by waving a white flag when faced with challenges from God, said PAS leader Nik Abduh Nik Aziz.

The Bachok MP said they should instead pray to God.

"Raise your hands and supplicate to God. That is the flag of strength and optimism in facing life’s challenges.

"Don't surrender to these challenges by teaching the people to raise a white flag," he said in a Facebook post today.
Posted by KTemoc at 8:20 pm