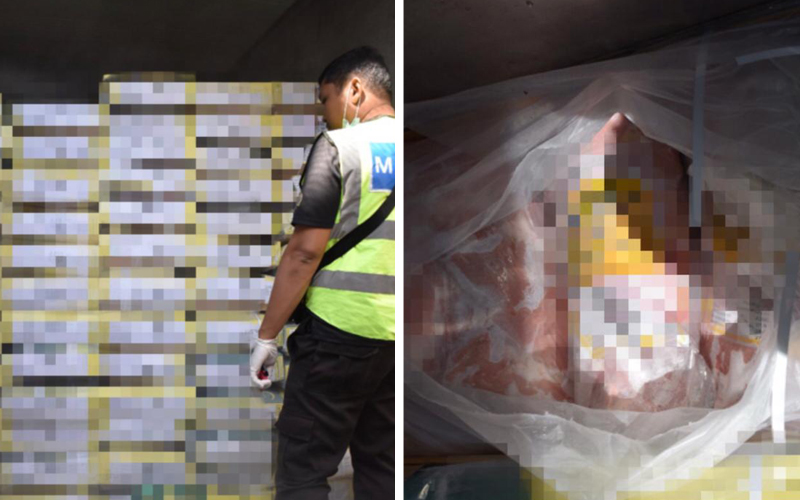 A Maqis officer inspecting the seized frozen meat at the Butterworth port earlier this week.

GEORGE TOWN: The spectre of the “meat cartel” raised its head again when a consignment of nearly 30 tonnes of boneless buffalo meat worth RM427,000 from India was seized by government food inspectors at the Butterworth port earlier this week.

There were discrepancies between the halal certification on the consignment and the packaging of the seized meat.

Malaysian Quarantine and Inspection Services (Maqis) director Noriah Dahlan said officers ordered the items to be seized on Tuesday as the halal certificate on the consignment did not match the packaging of the imported meat.

She said the 27,998kg of meat worth RM427,691 was seized, as the discrepancies in halal certification was an offence under Section 13 of the Maqis Act 2011 for using a false permit, licence and certificate for livestock and produce.

The offence carries a RM50,000 fine and two years’ jail or both, upon conviction.

Late last year, it was reported that senior officers from at least four government agencies were believed to be working hand in glove with a cartel specialising in bringing non-certified meat, including kangaroo and horse meat, into Malaysia and passing it off as halal-certified products.

Unnamed sources reportedly claimed these senior officers, entrusted with ensuring that halal standards were upheld, had instead received bribes and sexual services to ensure the cartel’s operations went undetected.

The only countries that have been certified by the Malaysian authorities for the import of halal meat are Australia, Argentina, Brazil, India, South Africa, Pakistan, Japan, New Zealand and the US, with imports handled by Jakim and the veterinary services department.
Posted by KTemoc at 6:20 pm