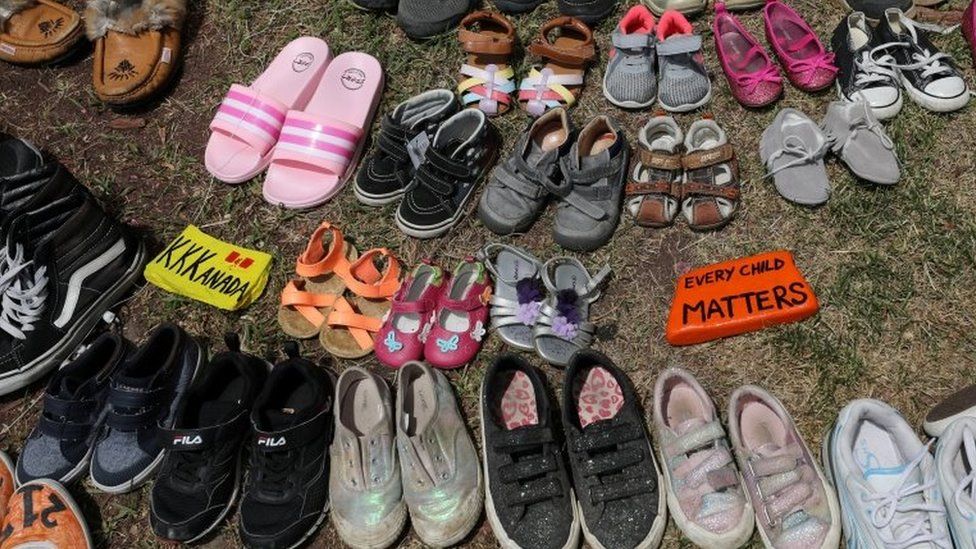 IMAGE COPYRIGHTREUTERSimage caption
In recent weeks, people have placed children's shoes at memorials to mourn those who died at Canada's indigenous schools

An indigenous group in Canada says it has found hundreds of unmarked graves at the site of a former residential school in Saskatchewan.

The Cowessess First Nation said on Wednesday that the discovery was "the most significantly substantial to date in Canada".

However the group did not specify the exact number of graves found.

It comes weeks after the remains of 215 children were found at a similar residential school in British Columbia.

Such compulsory boarding schools were run by the Canadian government and religious authorities during the 19th and 20th Centuries with the aim of assimilating indigenous youth.

Last month, the Cowessess began to use ground-penetrating radar to locate unmarked graves at the cemetery of the Marieval Indian Residential School in Saskatchewan.

The Cowessess called the discovery "horrific and shocking". The group is set to release further details during a news conference on Thursday.

Perry Bellegarde, national chief of the Assembly of First Nations described the finding of the graves as "tragic but not surprising". "I urge all Canadians to stand with First Nations in this extremely difficult and emotional time," he wrote on Twitter.

Between 1863 and 1998, more than 150,000 indigenous children were taken from their families and placed in these schools.

The children were often not allowed to speak their language or to practice their culture, and many were mistreated and abused.

A commission launched in 2008 to document the impacts of this system found that large numbers of indigenous children never returned to their home communities.

In 2008, the Canadian government formally apologised for the system.
Posted by KTemoc at 9:30 pm