Pribumi MB in Perak like Israelis, taking land away from farmers

Help us, farmers appeal to Perak footballers given their land as reward

PETALING JAYA: A group of farmers is urging the Perak football team to come to their rescue after they were issued eviction notices by the state government which plans to grant the soccer players their plots of land as gifts.

In an open letter, the farmers — who own 2-5 acres (0.8ha to 2ha) each — said their families had been tilling the land in Ulu Chemor, Hulu Kinta, for over four decades and it was their only source of income.

They said they were shocked when they received a notice from the Kinta Land Office on July 5, ordering them to move out within 14 days or risk a RM500,000 fine or a jail term of up to five years.

The farmers said they had no objections to the footballers being presented with land in appreciation of the team’s excellent performance.

But they wondered why it had to be their land.

“It’s not as if we have other plots of land that we can cultivate.

“We are small farmers, not big commercial farmers with tens of acres of land each.”

The farmers went on to say that they had sent a letter to the menteri besar yesterday, appealing to him to utilise a small portion of the land alienated to government-owned companies like Perbadanan Kemajuan Negeri Perak (PKNP), MB Inc and Perak State Secretary Incorporated (SSI) to reward these football players.

On May 3, Menteri Besar Ahmad Faizal Azumu had awarded land to 39 Perak footballers and officials for winning the Malaysia Cup final last year against Terengganu.

“We sincerely hope that you, the victorious Perak footballers, will support our appeal and ask the MB to call off this eviction exercise,” the farmers pleaded.

IPOH, July 27 — The Perak government has offered to rent out land belonging to the State Agriculture Development Corporation (PPPNP) to seven farmers from Chemor, after the state-owned land on which they have long toiled, were awarded to the Perak football team.

The farmers who received a 14-day eviction notice dated July 5 had on Thursday handed over a letter to Mentri Besar Datuk Seri Ahmad Faizal Azumu, seeking his help to intervene in this matter.

The Mentri Besar’s Office in a statement said that the government has no intention to take action on the encroachers despite occupying the state land without paying any revenue for more than 50 years.

“According to State Land and Mines Office record, a series of discussions were held with the farmers. An initial understanding was agreed, before the notice was issued to them.

“The illegal farmers were offered to rent land in a new location at Tanah Hitam, Chemor. The land was in the process of being transferred from the state government to PPPNP,” the statement read.

The statement also said that the 14-day notice given to the illegal farmers is a standard procedure for giving them time and space to prepare to clear the land.

“The move is also part of the state government’s effort to resolve encroachments in the land owned by the state and government-linked companies (GLCs), which have been going on for decades.

“The government is committed in solving illegal encroachments and squatter problem, but at the same time will help small scale farmers to continue their farming activities in a legitimate way by renting out the state and GLC’s land at a very affordable rate,” the statement further read.

On Thursday, PSM chairman Dr Michael Jeyakumar Devaraj, who represented the seven farmers, told reporters that those affected are small scale farmers who occupy a small piece of land measuring between 0.81 hectares and 2.02 hectares each.

Dr Jeyakumar said that the government should consider giving the farmers a temporary grant or licence to occupy the land as they are not big scale or commercial farmers and are merely cultivating to make ends meet.

On May 3, Ahmad Faizal awarded the said land to 39 Perak footballers and officials for winning the Malaysia Cup final last year against Terengganu.

Azumu takes away from farmers the land which they have cultivated for more than 40 years to give away to state footballers, and now offers to rent un-cultivated land elsewhere to them.

While the land might not have belonged to the farmers, they would have been given those land freehold under a PKR-DAP or Amanah MB.

But with the sole Pribumi ADUN being MB, he has virtually 'robbed' those hardworking farmers of the land they have sweated with blood, toil, tears and sweat for more than 40 years - just to make footballers happy.

Recall Azumu had been against freehold land being given to farmers who worked the land for ages?

It's time to get rid of a minority Parti Pribumi form holding the MB position. 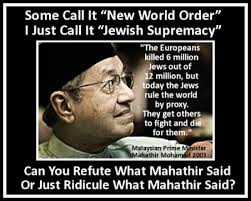 Meanwhile in Turkey Parti Pribumi Mahathir informs Turkish press about the seizure of Palestinian land by Israelis to form the State of Israel, which act has been the cause of terrorism.

Mahathri should look at Perak where his appointed MB Azumu is like the Israelis.