KUCHING: Independence is always an option if Putrajaya refuses to return Sarawak’s rights, Sarawak Association for Peoples’ Aspiration (Sapa) president Dominique Ng said.
“We are not just talking about the 20% oil royalty. We are talking about taking back everything that is rightfully ours,” he said after the Sarawak’s independence day celebration at Kuching’s Central Padang today.
Ng said many Sarawakians, including the youths, have started to realise the importance for Sarawak to have its say in running its affairs.
“We are not trying to be seditious. We are talking about gaining our freedom, which is supported by the United Nations General Assembly Resolution 1514 (Declaration on the Granting of Independence to Colonial Countries and Peoples).
“Sarawak was guaranteed self governance under article 8 of the 9th Cardinal Principles by the last Rajah Sarawak in 1946.
“This is a constitutional right granted by our last Rajah,” he said, adding that Sarawak has been known to be a sovereign country for 100 years.
However, Ng said Sabah and Sarawak have been “downgraded” to the 12th and 13th states in Malaysia.


He said the “colonial masters were changed on Sept 16 from Great Britain to the Federation of Malaya”.
“This is a sad reality which many people had failed to understand,” he said.
*********
Kaytee notes:

As I have mentioned in my previous post on
Secession for Sarawak?, I have previously been
strongly against secession, especially by Sarawak and Sabah, for the reason I've often stated, to wit, that my uncles and their peninsular mateys in uniform had shed blood, toil, tears and sweat during Confrontation, and thus, I admit, I have been very much influenced by their emotional attitude towards secession.

But recently, I have changed my mind - ie. if Sarawak or Sabah wants to go it alone, Putrajaya should allow either one to do so. What's the point of holding back Sarawak or Sabah if Sarawakian or Sabahan hearts are not with Malaysia?

Besides, Peninsula or Putrajaya has not treated the Eastern States as per MA63.

But what has riled me in above FMT article has been Dominique Ng's cringeful subservience to the name of Raja Brook, the so-called White Rajahs of Sarawak, who were Lords to the Sarawakians. What a slave-like mentality for Sarawakians to even hanker after the days of white rule.

It's not unlike that old woman in Hong Kong who held a union jack in memory of sucking up to whites. 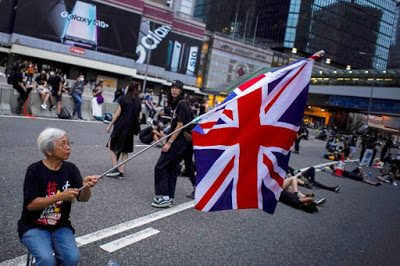 Dominique Ng disgusts me with his subservience-to-Orang-Putih cringe with his "our last Rajah", showing that to him, the White Rajah must be superior to Putrajaya - Podah.

Besides, Dominique Ng seems not to know his own Sarawak's history. After WWII, Charles Vyner Brook ceded Sarawak to Britain, not granted independence to Sarawakians.

The British wasn't quite clear as to what rights they have vis-a-vis Sarawak so they just annexed it as a British Crown Colony. And he should learn something about the anti-cession movement of Sarawak. 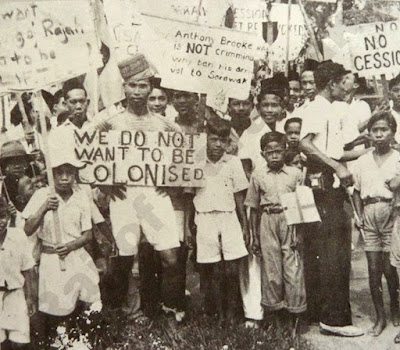