KUALA LUMPUR: PKR vice-president Datuk Seri Mohamed Azmin Ali has clapped back at the party’s president Datuk Seri Anwar Ibrahim over the latter’s suggestion for him to resign as federal minister if he is indeed found to be the other man in the viral sex video.

Azmin said the Port Dickson Member of Parliament needed to do some self-reflection.

“Read my lips. Tell him to look at the man in the mirror,” he briefly told reporters at the Parliament lobby today when asked to comment on Anwar’s remarks.

Anwar had earlier said that Azmin should quit if he is indeed found to be the other man in the viral sex video said to feature PKR’s former Santubong Youth chief, Haziq Aziz.

Earlier this week, PKR information chief Datuk Shamsul Iskandar Mohd Akin had also called for leaders who are implicated in scandals to go on leave.

Azmin yesterday responded briefly by saying: “Don’t be a hypocrite.”


It's plainly and also painfully obvious that Azmin Ali has crossed the Rubicon in his long-time relationship with Anwar Ibrahim. Once an acolyte, then a loyalist, eventually a long-time matey, confidante and close buddy-brother to Anwar for almost two decades, Azmin is now an enemy and some even believe, a ferocious and hostile competitor/rival to be Malaysia's 8th PM.

Pompey or Gnaeus Pompey Magnus was also a Roman general from a rich Roman noble family, in fact a son-in-law of Julius Caesar and like Azmin is to Anwar, a serious rival for Roman leadership.

By Roman law, no Roman general was ever allowed to take his legions across the Rubicon River into Roman territory (not the same as today's Italy), which act threatened the Roman Senate. It woudl have been treason to the State for any Roman general to do so.

From Wikipedia: In January of 49 BC, Caesar brought the 13th legion across the [Rubicon] river, which the Roman government considered  insurrection, treason, and a declaration of war on the Roman Senate.

According to some authors, he is said to have uttered the phrase "alea iacta est"— the die is cast —as his army marched through the shallow river.

Today, the phrase "crossing the Rubicon" is a metaphor that means to pass a point of no return (usually in a hostile commitment), and Azmin Ali has just done that in regards to his relationship with Anwar, when he said “Read my lips. Tell him to look at the man in the mirror”.

The war between the two FORMER mateys is now real, bitter and on.

Who benefits, well we just need to wait and see, though many say Mahathir (and not Anwar or Azmin) would be the one, wakakaka.

Yes, sad for PKR, the Dökkálfar Dwarfs and the Pandan Cats have finally 'divorced'.

Today, some of the Dwarfs in PKR Central Committee, namely, Zuraida Kamaruddin and Tian Chua, etc and Petaling Jaya MP Maria Chin Abdullah (is she also a Dwarf?) have been reported by FMT as criticising .....

Anwar Ibrahim’s call for his deputy Mohamed Azmin Ali to resign from his Cabinet post if the clips in the gay sex video scandal are proven authentic, saying the focus should be on party unity and a stand against gutter politics.

In a joint statement, they said Azmin had denied any involvement in the matter and that Anwar, as PKR president, should stand by his deputy instead of seeking to “undermine him using speculation”.

“Anwar should remember that since Reformasi, the party has defended him against identical tactics using sex videos and other means of gutter politics, even when the police chief in 2011 declared a sex video implicating him as genuine."

“He should remember that Azmin defended him and his family for more than 20 years against the same type of gutter politics.”

But what can Anwar say now, since Azmin has chosen to cross the Rubicon?

In the meantime let's read a few extracts from FMT:

Kamarul Zaman Yusoff of Universiti Utara Malaysia told FMT he saw Azmin’s curt comeback – “look at the man in the mirror” – as the first salvo in an open war between the PKR president and deputy president. [...]

Kamarul said things were not looking good for Azmin.

Referring to sex videos allegedly featuring Azmin and former Santubong PKR Youth chief Haziq Aziz, he said the popular perception, at least on social media, was that the clips were genuine.

“So, in this war, Anwar seems to have the upper hand,” he said, adding it was notable that Mahathir appeared yesterday to have distanced himself from Azmin for the first time, when he said it was up to him to decide whether he wanted take a leave of absence from his post as economic affairs minister.

Mahathir previously said the videos were possibly fake and there was no call for Azmin to resign.

Alas, Kamarul Zaman also said it's likely a fallen Azmin will take Anwar 'down' with him, and the fall of Azmin seems inevitable as it's likely the video clips are authentic, which might be why Anwar was pressing for the police to confirm what he already knows.

This is NOT to say Anwar has been complicit in the 'exposure' - he probably didn't know about it until lately - but there are always over-eager and well-meaning supporters who would do things, supposedly for the leader, but sometimes fKc the leader up, wakakaka.

But the suspected bona fides of the video clips has given Anwar a heaven-sent golden opportunity to remove Azmin once and for all as a gnawing threat to his PM-ship, as his former buddy and now party deputy has emerged as a painful and hostile thorn in his side.

Azmin Ali of course has harboured and kept a covet rein his personal ambitions for a long long time, initially believing he would somehow succeed Anwar but that wait of natural succession has been far too long, aggravated by Anwar's 'wandering in the Canaan wilderness' for 20+ years, and not everyone has the longevity genes of Mahathir, wakakaka. 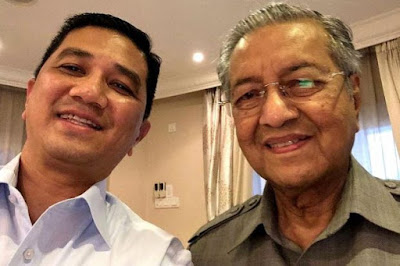 Back to Kamarul Zaman Yusoff of Universiti Utara Malaysia: Kamarul said Azmin knows "a lot" about Anwar in their long relationship when Azmin was a close confidante, wakakaka, and if Azmin arrives at a stage when he has nothing more to lose in the Malaysian political arena, he can and probably will be very unpleasant towards Anwar.

Kamarul said that UMNO and PAS will definitely benefit from the PKR fracas by keeping quiet and out of the Blue Moon's internecine war.