Hard times ahead for PKR in Azmin-Anwar stoush

Making sense of the sex video and Anwar-Azmin rivalry 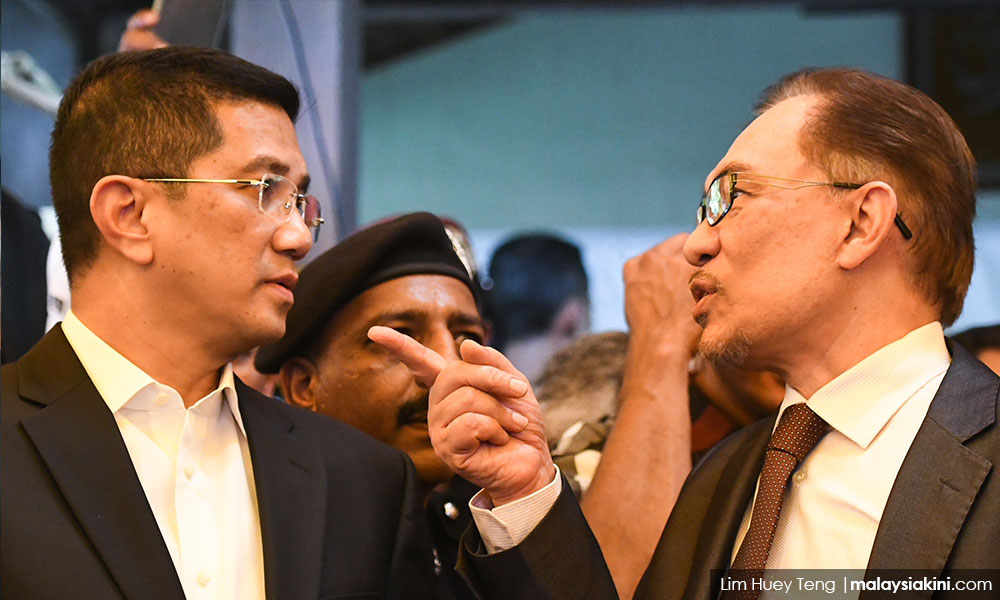 COMMENT | When the latest sex video controversy first surfaced, I told myself to stay clear of it.
I refrained from commenting on the incident, online even when prodded by friends to do so, and never thought of writing about it in this column, too.
Oh no, not another one, was my exclamation to a Sarawak friend who asked me whether I have viewed the video the very day it first emerged. I told him I haven’t.
After Sodomy I and Sodomy II, which spanned over two decades, Malaysians must have had enough of this deadly combination of sleazy sex tapes and dirty politics. Surely, we don’t need another one. Our politicians should allow Malaysians to catch a breather.
Why wasn’t I bothered about a sex tape depicting two men with homosexual tendency? Because another person’s peculiar sexual orientation is not an issue to me. I have never been judgmental on this and I have no right to. Understanding and respect should be the norms here.
According to Wikipedia, homosexuality is one of the three main categories of sexual orientation within the heterosexual–homosexual continuum.
Scientists do not know what determines an individual's sexual orientation, but they theorise that it is caused by a complex interplay of genetic, hormonal, and environmental influences, and do not view it as a choice.
Who are we to say anything if a sexual act of any kind is participated by consenting adults? However, if the act is deemed criminal and if you are a public figure, just make sure you don’t get caught.
God help you if you are exposed in full view, whether intentionally or unknowingly, in front of the camera. This is the case of Haziq Abdullah Abdul Aziz and the person whom he alleges to be his partner, Economic Affairs Minister Mohamed Azmin Ali.
As the controversy played out, we now know that the video is authentic, but here’s the catch. The identities of the two men recorded engaging in sexual acts could not be identified, according to Inspector-General of Police Abdul Hamid Bador (photo).
“The outcome of the facial recognition process is negative and it cannot link the 'pelaku'(person) in the video to the 'individual mentioned',” he added in a statement.
However, Hamid did not specify if this meant Azmin is cleared of any wrongdoing. The top cop wisely chose his words carefully - as he should in such a high-profile case.
Let’s do a rewind.
I recall checking with friends in the media on the first day and the second day the video surfaced and all (I repeat “all”) believed the video was authentic. No, journalists are not always right but in this case, they were on the dot.
Although I do not read the vernacular newspapers and am not aware how they reported the sex video controversy over the past month, I have to say that the major English news establishments, including Malaysiakini, have been responsible.
None even insinuated that Azmin was featured in the tape. It would be irresponsible for journalists to accuse or allege in writing merely on a hunch.
Perhaps then, Azmin should heed the advice of Dr Mahathir Mohamad, who had said, “It is up to the minister whether he wants to take leave or not.” After all, it is well known that the prime minister has a soft spot for his economics affairs minister.
The days and weeks ahead should be interesting. The prime minister’s comments on the issue will be carefully scrutinised.
There is one thing we can all agree with Mahathir (photo) from the outset. This is dirty politics at work. None should be surprised if, at the end of it all, all those involved would admit their guilt in planning and plotting an elaborate scheme to get rid of a political rival.
If PKR were still in the opposition today, I doubt the rivalry will be that intense. There will be fewer distractions as there will be little or no spoils to fight over.
Now that PKR is the biggest partner in the Pakatan Harapan coalition, there is a lot more going for the strongest group, as it will gain more of the spoils of victory.
In this patronage system, party members will find themselves particularly useful only if there is rivalry at the top.
If key leaders are involved in an internal struggle, members down the line would want to take sides, hoping for something to trickle down to them below.
In the case of this clash between Azmin and PKR president Anwar Ibrahim, plenty is at stake.
Is it any wonder then that the two camps are going all out to destroy one another?
Calls for unity among leaders of the two camps are all a silly façade if this patronage system is not dismantled in our political parties and replaced with a merit system.
I see a difficult path ahead for the two sides to reconcile, not after so much anger, hatred and dirt have been spilt and smeared against each other.
Anwar has a tough task ahead to pull together the warring factions but for the sake of the Harapan government, which still has four more years to manage the nation, let’s wish him success.
FRANCIS PAUL SIAH heads the Movement for Change, Sarawak (MoCS) and can be reached at sirsiah@gmail.com
Posted by KTemoc at 11:42 am