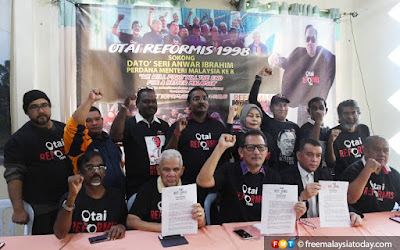 Its secretary Abdul Razak Ismail said the police SOP was all over the place and questioned why only former Santubong PKR Youth chief Haziq Abdullah Abdul Aziz underwent police remand while his alleged partner in the video remained free.

"The case is being investigated under the Communications and Multimedia Act 1998 but how about Section 377A of the Penal Code, which deals with carnal intercourse against the order of nature?" questioned Abdul Razak.

Otai Reformis is a group known for being pro-Datuk Seri Anwar Ibrahim who is PKR president.

Abdul Razak said both Haziq and the other man in the video should be treated equally by the police.
"It should not be that he remains free because he is a Minister, but Haziq can be arrested because he is not in a position of power," said Abdul Razak.

Meanwhile, Otai Reformis deputy chairman Mustapa Mansor questioned the duration of the probe that has dragged on for more than a month without a conclusion.

He said that several statements by Inspector-General of Police Datuk Seri Abdul Hamid Bador were "quite confusing", adding that he should be more careful in order to avoid speculation and public unrest.

"The statements by the Inspector-General of Police should be fact-based and clear data and not hearsay and accusations," said Mustapa who read out the press statement by the group here on Friday (July 26).

On July 18, Abdul Hamid said the sex video implicating Economic Affairs Minister Datuk Seri Azmin Ali was likely to be "genuine", adding that there was an evil conspiracy led by a leader of a political party to humiliate and damage the reputation of an individual.

The IGP said CyberSecurity Malaysia determined that the video was likely authentic but could not identify the men in the sex video through facial recognition software.

Abdul Hamid also said that the video was produced by parties that paid hundreds of thousands of ringgit and spread it to cause unrest among the public.

Mustapa also said that both the Minister in question and a certain Mentri Besar, who had recently said that they knew the mastermind behind the video, should give their statements to the police.

He was referring to Azmin, who said he knew the video mastermind and Selangor Mentri Besar Amiruddin Shari, who claimed that it was someone who had gone through the same dark patch in the past.