Why Professor Datuk Shad Saleem Faruqi is targeted by IKSIM 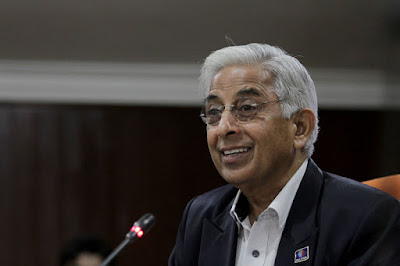 PETALING JAYA, Dec 18 — Prominent law lecturer Datuk Shad Saleem Faruqi invited today his critics from a Muslim research organisation that cast doubt over his religious credentials to an intellectual discourse with him.

An emeritus professor with Universiti Malaya, Shad Shaleem confirmed with Malay Mail that a police report had been filed against him by the Islamic Strategic Research Centre of Malaysia (IKSIM), although details of the complaint was not known.

“I am more than happy to have a dialogue with them and would prefer to solve the matter peacefully if they too feel the same way.

“I am more than ready to show that I am also a practising Muslim just as they are and would rather have an intellectual and Islamic discourse with them.”

Also, ulamaks like those in JAKIM, JAWI, JAIS etc are shit scared of intellectuals like Prof Shad Saleem Faruqi, Kassim Ahmad, etc. They are good only at bullying women (like Nik Raina) and pakciks and makciks in kampungs. 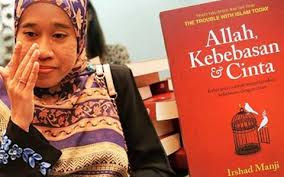 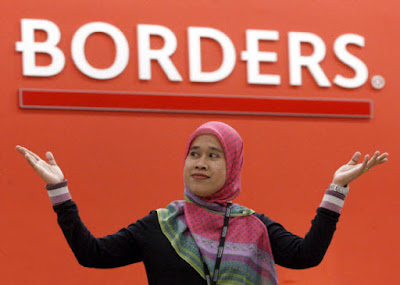 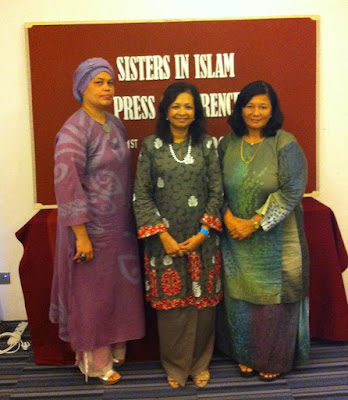 But what does 'liberals' in Islam means? Those having opposite concepts and understanding of Islam than IKSIM? 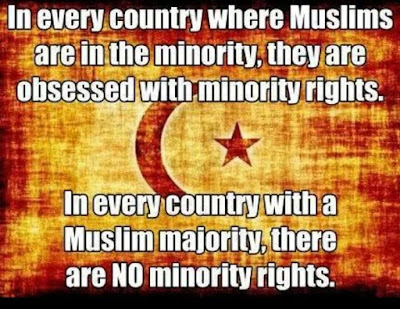 Like the late Kassim Ahmad sneering on the ulamaks for imposing their own interpretation of Islam on Malaysian Muslims? What was their response?

They arrested him, and even then, illegally as the court eventually podah-ed those ulamaks' nonsense and illegality. 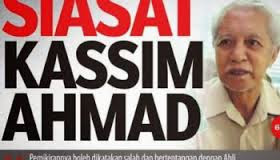 And what was Kassim Ahmad's alleged crime or sin towards Islam?

Kassim had said: “This priesthood caste did not exist at the time of the Prophet or the four caliphs. They only emerged about 300 years later by appointing themselves as interpreter of religion for Muslims.”

“They (Muslims) view their religious leaders like gods and goddesses, that these leaders are seen to be protected from maksum (protected from sin) and must decide on everything about their lives.”

Kassim Ahmad was thus arrested for his alleged controversial remarks on the (man-made) Hadith (religious rulings made by mortal man), but not the divinely authored Quran. Those ulamaks trembled in his intellectual presence.

Kassim Ahmad was not only acknowledged as Malaysia's foremost Malay intellectual, but also the most dangerous man in Malaysia (despite being 82-years old), not to us, but to those JA-organisations, wakakaka.

As I have said, religious authorities fear intellectuals who used their Allah-bestowed intellect to reason out mortal issues and invariably threatened the livelihood of those social parasites.

Now, what has Prof Shad Saleem Faruqi done that shook the balls of those ulamaks and vibrate their teeth in their skulls?

For a start, let us peruse his take on Islam in Malaysia, whether the nation is secular or Islamic. as follows (again extracts only for consideration of length):

ISLAM AS THE RELIGION OF THE FEDERATION

Historical evidence: Malaysia’s document of destiny does not contain a preamble. The word ‘Islamic’ or ‘secular’ does not appear anywhere in the Constitution. However, there is historical evidence in the Reid Commission papers that the country was meant to be secular.

This view of a secular history is strongly challenged by those who argue that before the coming of the British, Islamic law was the law of the land. With all due respect, such a picture oversimplifies an immensely complex situation. A look at the legal system prior to Merdeka indicates the presence of a myriad of competing and conflicting streams of legal pluralism.

The Neolithic people who lived in the alluvial flood plains of Malaya between 2500 BC and 1500 BC possessed their own animistic traditions. Likewise the Mesolithic culture (encompassing the Senois of Central Malaya, the Bataks of Sumatra and the Dayaks of Borneo), the Proto-Malays and the Deutero-Malays had their own tribal customs.

Hinduism from India and Buddhism from India and China held sway in South East Asia between the first to the thirteenth centuries and left an indelible imprint on Malay political and social institutions, court hierarchy, prerogatives and ceremonials, marriage customary rites and Malay criminal law. The incorporation of the patriarchal and monarchical aspects of law are said to have been influenced by Hindu culture. Some of these influences linger till today.

In Peninsular Malaysia Chinese traders brought with them their own way of life and the close relationship between Malacca and China during the days of the Malacca Sultanate opened the door to Chinese influence on Malay life.

Before 1963 Sabah and Sarawak were guided by their native customs and by British laws. The influence of Islam was marginal.

As if that was not bad enough for those ulamaks, Prof Shad had in 2005, while as (is?) Professor of Law and Legal Adviser to Universiti Teknologi MARA, written an article titled 'The Enforcement of Morality' for the Malaysian Bar, as follows (extracts only):

Is it the business of the law to suppress vice and to enforce morality?

Discussion of these issues is premised on the belief of the “legal positivists” that law and morality are two distinct spheres which can (and should) be kept apart. In fact, the distinction between legal and moral duties is not always possible.

It is also noteworthy that the debate on whether the law should enforce morality tends to concentrate on matters of sexual morality. It is time to broaden our moral horizons and to recognise that there is more to morality than sex. Socio-legal issues such as corruption and crime are also the stuff of morality.

Once morality is understood in a broader context, it becomes obvious that the enforcement of morality is one of the primary functions of the law.

Islam’s requirement to prohibit all that is munkar and to promote all that is ma’aruf has to be borne in mind.

At the same time Islam’s respect for privacy must be honoured. Harming fellow Muslims, trying to uncover their nakedness, committing espionage or reporting on the private affairs of others is forbidden in Islam.

KT note on 'to uncover their nakedness':

... the Jawi raid team comprised eight officers, seven who were male and had forcefully entered their room despite Mohd Ridhuan telling them his wife — in a singlet and shorts — was underdressed.

The male enforcers allegedly refused to leave the room even after the husband presented photos of their wedding and their Jawi-issued marriage certificate, and instead ordered Siti Sarah to dress in front of them.

Scuffles broke out twice during the raid during which Mohd Ridhuan said he was strangled and suffered injuries to his neck while his wife’s left arm was bruised. Both said their injuries required medical attention.

According to a Hadith, exposing the faults of others through suspicion and espionage, spying upon one another, trying to bare each others hidden failings and exposing or exploring the privacy and personal weaknesses of the people is regarded as reprehensible.

According to another Hadith “if anyone tries to uncover the nakedness of his Muslim brother, God will uncover his own nakedness".

Then in 2009, the good Prof discovered a lacuna in the court’s punishment decree against Kartika Sari Dewi Shukarno who was to be whipped in August that year for drinking beer. 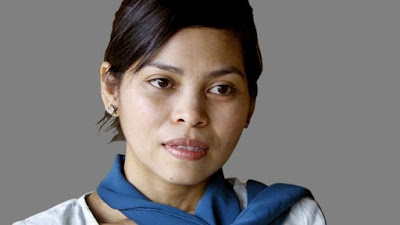 By the by, 'lacuna' means 'a gap or missing part in a manuscript or logical argument (of law)'.

According to the Prof and indeed also Terengganu Chief Syariah Judge Datuk Ismail Yahya, that lacuna should have possibly prevent the authorities from caning her (which would have frustrated those ulamaks kaukau, wakakaka).

Kartika was already fined RM5,000 but she was also to be given six lashes by the Pahang Syariah Court for the offence of yamseng-ing on 12 July 2007 at a nightclub in Cherating but no jail sentence.

Point No 1 - In Malaysia only the prison department and no one else may cane a prisoner.

The argument went - As Kartika wasn’t sentenced, she was not a prisoner, thus she needn't go to prison. Therefore how was the authority going to cane her?

Jakim legal adviser Mohd Zulbahrin Zainuddin unsurprisingly asserted it required just a warrant to require Kartika to turn up at the prison for sentence to be carried out.

Mind, he mumbled unconvincingly: “Kartika will just be detained. The prison is just a place for her to wait. If Kartika wants to object, she has to go to the Syariah High Court and file an appeal. Since she has not done so, it is considered a straightforward case.”

Point No 2 - Not so, said Professor Shad, arguing that a detention order (via a warrant to detain) was in fact a second sentencing, i.e, an additional penalty to the caning and RM5,000.

And as Kartika has paid the RM5,000, she couldn’t be jailed in lieu.

But she couldn’t be caned unless she was jailed. And she couldn't be jailed as there's no jail sentence imposed on her - the 'lacuna' that Professor Shad mentioned.

Wakakaka - those ulamaks caught in an intellectual trap, which has been why they have been shit-scared of Malay-Muslim intellects. 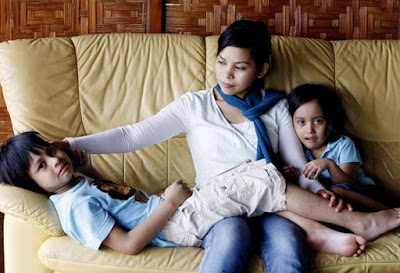 Prof concluded, “We’ve got a lacuna, that is the person who is to be whipped must be jailed. According to the law, nobody can be deprived of his life or liberty, except by the law. In this case, the law came to an end when the trial ended.”

“The judge imposed only two punishments [i.e. RM5,000 and caning]. He cannot now turn around and impose a third punishment. This is illegal. It’s almost like double jeopardy.”

Shad also quoted Article 7 of the Federal Constitution which states that if a person has been convicted of an offence, he or she could not be tried again for that offence.

“Kartika was not sentenced to jail initially. It would be unjust for the court to impose a new penalty.”

“Only the Syariah Appeal Court can deal with this matter now. So, the DPP should appeal to have the sentence increased. But the judge of the first instance should not be increasing the sentence himself. That is wrong.”

Shad explained: “There are only two types of detention: remand and prison. It can’t be remand because Kartika was convicted. And it can’t be imprisonment because she was not given a jail sentence.”

Terengganu Chief Syariah Judge Datuk Ismail Yahya warned Jakim that the whipping will be ultra vires and opened the authorities to a legal suit.

He advised: “Kartika can sue. This is because her detention, and subsequently the whipping, is illegal.”

But somehow, those ulamaks got Kartika who was actually a Singaporean citizen. She demanded that she be caned in public which again must have infuriated the ulamaks.

But at the very last minute a la the US 7th Calvary, HRH Sultan Pahang gave her a pardon, substituting her caning for 3 weeks of community work.

Then just last month, the Prof gave the ulamaks another blow when he talked about ‘Nothing in constitution that makes atheism unconstitutional’ that again infuriated the ulamaks.