FMT - Guan Eng: Najib not royalty, why protect him from insult? (extracts): 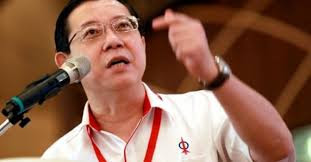 PETALING JAYA: Penang Chief Minister Lim Guan Eng said Prime Minister Najib Razak cannot be placed on the same level as royalty, with the law being used to protect him against any alleged insult.

Calling the investigations into a news portal for allegedly insulting Najib an “abuse of power”, Lim asked if leaders from the opposition would be accorded the same treatment.

“If insulting Barisan Nasional leaders like the prime minister is an offence, what about making threats of bodily harm against the Penang chief minister or those insulting the Selangor menteri besar and a former prime minister?

“I simply disagree with it, however, because the PM, Selangor MB and Penang CM should not enjoy any immunity from insults as it would weaken the democratic process of elections.

“If these insults are untrue, then defamation suits should be filed to claim compensation,” Lim said.

“Why were no investigations carried out against BN-controlled media such as the New Straits Times, Berita Harian, The Star and Utusan Malaysia when they lost in defamation suits in courts, paid compensation, apologised and unreservedly withdrew their false reports against me?

“Such double-standards must stop to preserve whatever little credibility is left, or else online news media such as Malaysiakini, Free Malaysia Today and The Malaysian Insight will gain a wider readership at the expense of the plunging circulation of BN-controlled media.”

Guan Eng has a valid point, that the PM of a country is still an ordinary citizen who is unprotected from reasonable degrees of criticisms, though such criticisms must not be directed at the nation's royalty.

Sadly, in our Malaysia, an elected politician such as the PM, once in office, is endowed with an aura of the Malay equivalent of 'Mandate of Heaven'.

The ordinary Malays find it hard to distinguish between a PM (or MB) who is voters-elected (not directly though), to be their representative but who also becomes a PM by virtue of his party winning majority rule, from that of a Sultan who has been born into an exalted royal position.

This dilemma has existed in Malaya then Malaysia ever since the nation adopted Westminster parliamentary democracy as our political system.

The fundamental cause is that while the Malays among all ethnic groups are the most active in modern politics, the concept of parliamentary democracy and its people's representatives conflict confusingly with the Malays' concept of loyalty to a liege lord.

I call it the 'Hang Tuah Confusion'.

It basically means that while Malays are monarchists (a la Tuah and not Republicans a la Jebat), some have confusingly mistaken their elected representatives such as the PM, MB, etc as belonging to the class of 'royals', not unlike the Indian perception of their politicians-in-power as exalted Brahmins.

It's a long uphill struggle to transform the Malay mental state to that of say, a British, who believes in respect for both Westminster Parliamentary Democracy and that due to the nation's royal institution, but without confusing the former for the latter.