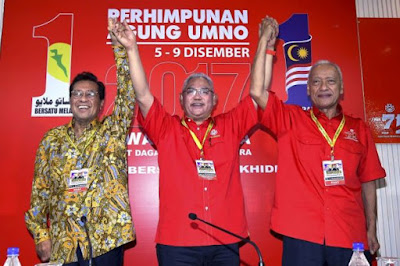 "I am ready to help Umno and Barisan in Selangor and with any others if it is for the good and prosperity of the rakyat and state," he told reporters after attending the opening of the Selangor Umno Convention at PWTC on Saturday.

The Bandar Tun Razak MP said that he will lend his experience and use his influence to win support for Barisan.

In October, after attending a fundraising hi-tea by Selangor PAS, Khalid had said that he would campaign for the Islamist party in the upcoming polls.

On this point, the former mentri besar said that this did not conflict with his support of Umno.

"I am still an independent and there is some good in this. It gives me the freedom to work with whoever helps unite the faithful for the good of the state," he said.

Khalid, who is also Port Klang assemblyman, added that he would not be defending his seat in the coming general election.

"The worry that I am helping so that I can secure a seat in the coming polls does not arise at all," he said.

Khalid was sacked from PKR for his refusal to vacate the Selangor mentri besar post in 2014.

There exists between Khalid and PKR Selangor (and indeed the Anwar family) very bad blood stemming from the unnecessary circus between him and Pakatan Rakyat in 2014, after the Rafizi-contrived Kajang by-election.

Years later, in fact in September 2017 (this year) we were informed by an angry Latheefa Koya that Rafizi had deviously and indeed unnecessarily created the Kajang by-election to elevate Anwar Ibrahim to be MB principally to block his intra-party foe Azmin Ali from becoming MB Selangor.

But leaving aside the Kajang bullshit, did she also imply PKR already had their dagger out for Khalid Ibrahim since Azmin was touted by her as the MB-to-be that worried Rafizi? In other words, there might have been already plans to get rid of Khalid and to make Azmin the replacement MB?

PAS members in the state government at that time split into exco who were still loyal to PR and those treacherously siding with a MB who had already lost the confidence of his erstwhile colleagues.

'Lost confidence' in political parlance means they wanted him to vacate the MB position for whatever reasons, and to make way for Wan Azizah (hubby's replacement in Kajang by-election which of course she won).

But amazingly for a parliamentarian, Khalid refused to obey his party, wakakaka. In his rebellious act I did and still do wonder how much HRH's very strong confidence at that time in him had been influential in his bizarre decision.

Indeed, HRH was right royally riled by Khalid's ouster, and on 26 September 2014 (during the swearing in of the new MB and exco) took the unusual step of publicly stating his regard for Tan Sri Khalid Ibrahim, the former state mentri besar at the centre of a prolonged leadership crisis this year, saying that the man was the victim of smear campaigning by his own party, PKR.

Using his speech to attack Pakatan Rakyat, the Sultan said Khalid had executed the duties of a mentri besar “successfully and perfectly” and that the leadership crisis was triggered by Pakatan Rakyat’s plans to oust Khalid by engineering a by-election in Kajang to allow de facto opposition leader Datuk Seri Anwar Ibrahim to enter the fray.

He said repeated accusations had been aimed at Khalid to force him to step down and that the tactic had been employed through the Muslim fasting month of Ramadan despite the palace’s reminders about maintaining the sanctity of the month.

The new MB Azmin Ali, said of the Sultan’s remarks that “It is good advice.”

But what followed Khalid's 'divorce' from PKR was a series of blame and counter blame between him and his former colleagues.

Khalid has been basically a businessman. a head of a conglomerate like PNB and Guthrie, and had to be said that while he was MB he was very thrifty with state finances, saving lots and lots.

Therein was his problem as a politician because state finances (revenue) earned should not just be saved but be correctly used to provide services, amenities and development of and improvements to state public facilities for the benefit of the rakyat.

But alas, as I said he was more of a businessman than a politician. Thus Khalid at that time ran Selangor state like a CEO of a Guthrie-like concern.

Just a mere 4 months after the tsunamic March 2008 general elections as MB Selangor I was disgusted by Khalid's bourgeois mentality when I saw how he handled the Grand Saga road toll debacle, more so when Tony Pua (DAP) criticized his refusal or reluctance to act for those Cheras residents who voted for him (Khalid). Pua stated:

"It is critical that the new state government demonstrate political will and determination to stand for what is right and just, without fear or favour, instead of wavering in uncertainty or adopting a “we will look into it” or “we will have to discuss further” culture which is reminiscent of the previous Barisan Nasional government."

"It is of great concern that Tan Sri Khalid Ibrahim had qualified his statement on the “right of use” by saying that the state government must also take into consideration that the toll is the source of revenue for the company."

Yes, Khalid Ibrahim was more concerned about revenue for the toll company than the rights of the Cheras residents.

Anyway, today he has signalled his intention to campaign for BOTH UMNO and PAS. It is his due right and something we should have expected considering he was done badly by PKR.

This is not to say I don't agree with his removal as MB in 2014 as I believe he was not a good rep for the Selangor people.

In fact, dear olde socialist me started to dislike him way before the Grand Saga toll debacle, principally because of PSM's aversion, antipathy and animosity towards him. He was unfortunately remembered by Indians with a decided lack of fondness or respect.

During the Ijok by-election in 2007, an unhappy PSM had reminded most local Indians of Khalid as an unfriendly Guthrie towkay.

He should find UMNO (his original party) as a better home for his political inclinations.