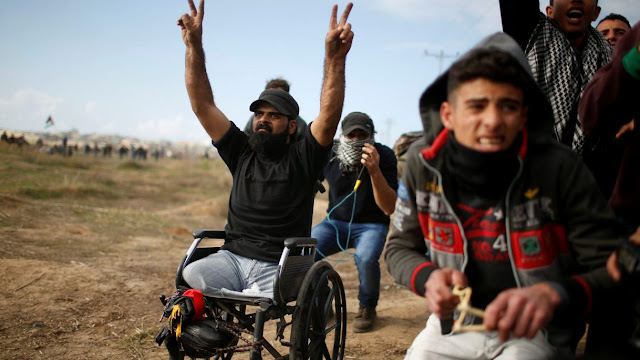 Nine years ago the Israelis took his legs in an air strike.

Last Friday they shot him, a man on wheel chair, in the head.

That's the evil of the Israeli sharpshooter.

Ha'aretz, a Jewish news media, reported in The Israeli Military First Took His Legs, Then His Life:

The Israeli army sharpshooter couldn’t target the lower part of his victim’s body — Ibrahim Abu Thuraya didn’t have one.

The 29-year-old, who worked washing cars and who lived in Gaza City’s Shati refugee camp, lost both legs from the hips down in an Israeli airstrike during Operation Cast Lead in 2008.

He used a wheelchair to get around. On Friday the army finished the job: A sharpshooter aimed at his head and shot him dead.

The images are horrific:

Abu Thuraya in his wheelchair, pushed by friends, calling for protests against the U.S. declaration recognizing Jerusalem as Israel’s capital;

Abu Thuraya on the ground, crawling toward the fence behind which the Gaza Strip is imprisoned;

Abu Thuraya waving a Palestinian flag; Abu Thuraya holding up both arms in the victory sign;

Abu Thuraya carried by his friends, bleeding to death;

Abu Thuraya’s corpse laid out on a stretcher:

Abu Thuraya posed no danger to anyone: How much of a danger could a double amputee in a wheelchair, imprisoned behind a fence, constitute?

How much evil and insensitivity does it take in order to shoot a handicapped person in a wheelchair?

Abu Thuraya was not the first, nor will he be the last, Palestinian with disabilities to be killed by soldiers of the Israel Defense Forces — the most moral soldiers in the world, or not.

12 years ago I posted Hebrew Warrior Smote Evil Canaanite in which I penned (just an extract - you can read the full post via the link): 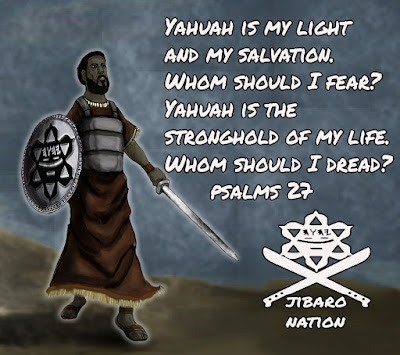 Iman al-Hams, a young 13 year old girl was not only wounded or shot dead by Israeli troops but subsequently had more than a dozen bullets pumped into her even when she was lying immobile.

The perpetrator of the act of hatred? An Israeli captain who yelled to his troops: "Anything that's mobile, that moves in the zone, even if it's a three-year-old, needs to be killed."

His own troops reported his act of sheer hatred and utter cold blooded brutality.

The Israeli Army tried to cover up his vile act, by lying that they shot a 16-year old girl running away after she had planted explosives at an army outpost.

Obviously the Army had to jack up the age to that of a probable fighter (not good for the world to see a captain of the much vaunted Israeli Defence Force slaughtered a 13 year old girl) and fabricated the inclusion of explosives to spin a Palestinian act of evil, all in order to exonerate the perpetrator. 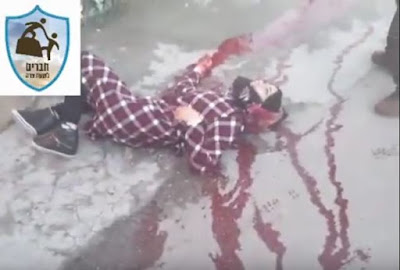 But as a result of its own troops' admissions, the Army had to revise that bullshit - it withdrew the part about the explosives.