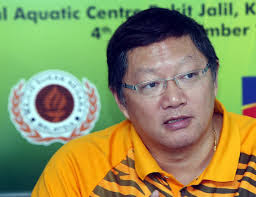 The non-renewal of the contract of national diving coach Yang Zhuliang, according to the National Sports Institute (ISN) and the swimming union, was because of his "unscientific way of coaching".

These two organizations need to provide better excuses or they will continue to be seen as a laughing stock that could last until Tokyo 2020 or beyond.

Perhaps this was the sole reason for his dismissal. Or could there be any other factor beyond the knowledge of outsiders?

Anyway, from what we know so far, without the slightest doubt the ISN and swimming union's excuses have been highly unsubstantiated.

What did they mean by being unscientific? Or should I ask what sports science actually is?

People might have the wrong impression that it means the use of drugs, computer technology or state-of-the-art equipment to re-engineer athletes into some sort of robotic beings.

Most definitely not. Sports science is about integrating a variety of sciences and experiences such as psychology, nutrition science, etc. to energize an athlete in a bid to significantly lift his or her performance.

But, this should only serve as an auxiliary regimen for athletes. The core value of sports science lies with the employment of a set of tested training methods to strengthen the foundation of the athletes before instituting intensive training to enhance their techniques, stamina and strength.

To be fair to Yang, he must have his own way of coaching which is very likely derived from China's training of divers modified locally for our diving squad.

Such a set of systematic training and coaching has on several occasions won us medals and accolades, thus having its effectiveness and reliability accredited and is thus fit for repetitive adoption.

What is this if it is not science?

Science, in its essence, is about a set of tested methods that operates in a controlled environment to produce the specific outcome and can be employed repetitively.

This very same process has seen the evolution of sciences in the likes of physics, chemistry, medicine, economics, sports science and many others.

I don't have to repeat here the remarkable contributions Yang has made to the sport. The fact that we started with nothing but have now emerged a reckoned force in the diving sport proves at least one thing, that Yang's methodology has worked, and is effective, tested and viable.

Dismissing Yang as "unscientific" itself is a deviation from the principle of science. We can therefore understand why he has become so frustrated with the lame excuses provided.

I need to reiterate that unless ISN and the swimming union could come up with more acceptable reasons for not renewing Yang's contract, people will continue to sympathize with the coach for the undeserved treatment he has been accorded despite his marvelous contributions towards the diving sport of this country.

This has reminded me of the universal phenomenon whereby local sports authorities have constantly treated foreign or even local coaches as disposable utensils that need to be discarded soon after use, including the frustrated badminton technical director Morten Frost originally hired by BAM on a five-year contract, and Portuguese Nelo Vingada, the national football team head coach who only managed to hold on to his job for five months!

Are there really problems with these foreign coaches? Or are our sports authorities being overly bureaucratic and unprofessional such that coaches have to fall prey to their perpetual infighting?