FMT informs us that Malaysia Airports Holdings Bhd (MAHB) is on the back foot, apologising for an erroneously spelt Christmas bunting in English put up at the Sultan Ismail Petra Airport in Kota Bharu.

The message on the bunting had read “Wishing you a Mary Christmas & Happy New Years”. 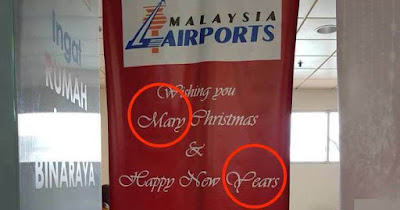 This photo has gone viral and many are making fun of it, saying that Malaysian English is on life support etc etc.

It's good to have a laugh occasionally as the common scene on the Net and other applications in Malaysia appears to be highly toxic, intolerant and acrimonious.

But I have a different take on the Christmas bunting at Sultan Ismail Petra Airport, poor spelling as it might have.

Kelantan is a state with Islamic dominance, and Malaysia as a federation is also struggling in a tussle between secularism and Islamic rule where at times we could see the gross and sometimes ridiculous religious intolerance.

Yet we see a Christian Christmas greeting in Kota Baru, albeit with errors in its spelling.

Leaving aside the funny spelling (I make such mistakes too, wakakaka and so did some high powered politicians in USA and Australia), surely it has been an amazing manifestation of religious tolerance, mutual respect for fellow Malaysians and goodwill (muhibbah) towards other religions.

I see the glass as half full rather than half empty. I see Sapno Tukijo rather than Zamihan Mat Zin.

Thank you MAHB for your magnificent efforts.