A PM and his billionaire sons 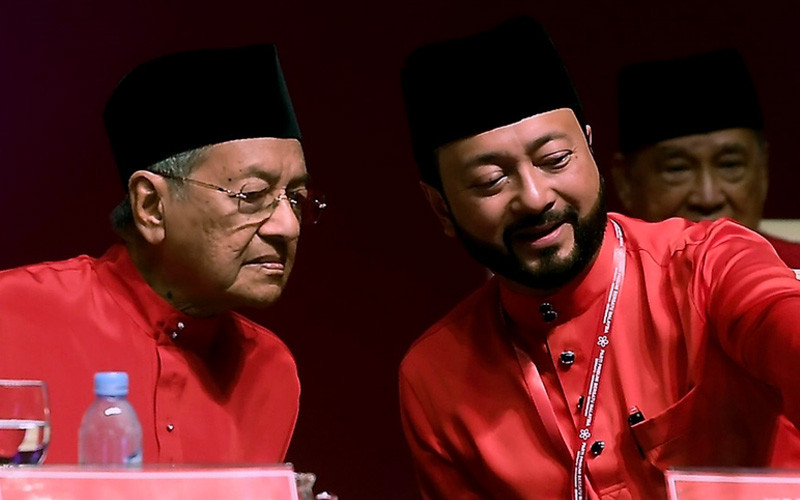 It was Tun Dr Mahathir Mohamad’s (left) actions that resulted in profligate corruption in Malaysia, and his sons may well have benefited from them, too. – Bernama pic, December 30, 2020

Datuk Seri Mukhriz Mahathir’s assertion that Pejuang will not support a prime minister installed via statutory declarations (SDs) from corrupt Umno leaders is hypocrisy of the highest order. It ignores the fact that his father, Tun Dr Mahathir Mohamad, was largely responsible for the profligate corruption in Malaysia.

Mukhriz should also have no need for reminders that he and two of his siblings were involved in cases that could well have involved corruption, but were spared because investigating authorities reported to the prime minister. More on that later.

If it was a consistent stand of Pejuang and its leaders, including Mukhriz’s father, it may be acceptable and laudable. But further examination shows that the statement is both hypocritical and ignorant of recent history, as well the more distant ones of corruption in Malaysia.

It was Dr Mahathir, whose Bersatu then won a dismal 13 seats at the end of the 14th general election in May 2018, who first wooed people, especially from Umno, to join Bersatu to eventually increase the numbers to some 36. So was it OK to admit Umno MPs then, but not work with them now? The only reason for the current stance is the obsessive desire of Dr Mahathir and allies to deny Datuk Seri Anwar Ibrahim the prime minister’s position.

Remember also that, if Dr Mahathir had just kept his promise to be only the interim prime minister, Anwar would have long succeeded him and none of these SD problems would have emerged. Pakatan would have been firmly ensconced in power and carrying out promised reforms.

Where were the reforms?

Talking of reforms, Mukhriz surely must be able to recall that, given the second chance to right things, Dr Mahathir never made any attempt thwarting it at every return. The net result: the effort to curb corrupt practices by removing over-concentration of power in the hands of one man never happened. The current back-door government is using this to the hilt.

And, don’t forget the unfettered power that Dr Mahathir assigned himself after the 1987 Op Lalang, when he shamelessly used oppressive legislation to detain over 100 key people, silence the media and brutally quell dissent after engineering racial dissent earlier.

This was preceded by a bruising battle for control of Umno when Dr Mahathir narrowly beat Tengku Razaleigh Hamzah for the president’s post. Ironically, the one who tipped the balance was vacillating Datuk Seri Najib Razak, who was prevailed upon by Anwar to cast his vote and those of his supporters for Dr Mahathir.

Dr Mahathir set up Umno Baru, admitting only those whom he favoured and excluding the Razaleigh faction, which went on to form Semangat 46. Dr Mahathir made it next to impossible to dislodge an incumbent Umno president and an incumbent prime minister, setting the stage for a series of decisions that was highly questionable in nature and would have been corrupt had authorities been free to investigate.

Before we go on to that, let’s talk first about the cases involving three of Dr Mahathir’s sons, including Mukhriz.

Mukhriz’s brother, Mirzan, was an upcoming logistics player, including in shipping, until his Korsortium Perkapalan became heavily laden with debt. Some analysts said it was too much debt. So, what did he do?

In May 1998, at the height of the Asian Financial Crisis (AFC), he made a deal with the Malaysian International Shipping Corp to sell Perkapalan’s shipping assets for US$220 million in cold, hard cash. MISC was owned by national oil company Petronas, which comes directly under the Prime Minister’s Department – Dr Mahathir was prime minister then. Mirzan had a 51% stake in Perkapalan.

In one fell swoop, he extinguished Perkapalan’s debt by that sale made during a very difficult time to a Petronas subsidiary. Many touted it as a bail-out for Mirzan, who may have gone bankrupt otherwise as economic conditions deteriorated following the AFC.

In 1998, when the AFC was peaking and businesses were facing enormous problems, the prime minister’s son had the good fortune of being saved by a national corporation under the Prime Minister’s Department. Does that not strike you as possible corruption, Mukhriz?

How Mokhzani became a billionaire

Another brother, Mokhzani, was involved in other businesses – in Phileo Land, part of the Phileo group of companies owned by businessman Tong Kooi Ong, who was close to Anwar in the 1990s.

There is considerable intrigue in the entire episode, with many linking the deal with a so-called split between former finance minister and Dr Mahathir crony, Tun Daim Zainuddin, and Dr Mahathir. Somehow, the prime minister's son was caught in the middle of it. The interest in Phileo Allied was the cash that would accrue to it from the sale of the bank. Mokhzani claimed then that he was exiting the business scene by selling his assets, but later reappeared in the petroleum industry.

His company was Kencana Petroleum, which, you guessed it, became a major Petronas contractor, during which time his father was an adviser to Petronas (Dr Mahathir was prime minister from 1981 to 2003, after which he came Petronas’ adviser). In 2012, Kencana merged with Sapura-Crest (which was set up by Dr Mahathir crony Tan Sri Shamsuddin Kadir) to become one of the largest oil-field services contractors in the world.

In 2017, Mokhzani exited the industry by selling his shares, but he had already attained billionaire status long before then. Malaysian Business magazine put him as the ninth richest man in Malaysia with a wealth of RM4.22 billion in 2014.

And then, there is Mukhriz himself. It was reported in August last year that legal adviser to the Sarawak government Fong Joo Chung accused Mukhriz of obtaining logging rights from Sarawak Chief Minister Taib Mahmud in 1994 when Dr Mahathir was in power.

The Sarawak Report showed correspondence giving approval for the clearance of 1,000ha to Mukhriz, who was at the time chairman of a company called Tanjung Tiara Sdn Bhd.

Surely that should arouse suspicion, but the matter ended there, with Dr Mahathir being prime minister again when the disclosure was made.

Dr Mahathir’s first term (1981 to 2003) was replete with other happenings that should be investigated, including major privatisation projects. Former Tenaga Nasional chairman Tan Sri Ani Arope told the story of how he was forced out of Tenaga Nasional Bhd when he refused to sign lopsided power purchase agreements that made billionaires of people such as the Yeoh family of YTL Power and later Tan Sri Syed Mokhtar Al-Bukhary.

Daim’s cronies, such as Tan Sri Tajudin Ramli, got huge telecommunications and airline privatisations (Malaysia Airlines), but much of it came back to the state after he got into trouble during the AFC, being bought back at the same price in the case of Malaysia Airlines despite a substantial erosion in value.

There was the example of an RM24.3 billion contract for the supply of naval vessels to another Daim crony, Tan Sri Amin Shah Omar Shah, which ended in grief. Tan Sri Vincent Tan got a privatisation deal for Sports Toto and Ananda Krishnan got the valuable turf club land, on which he erected the Twin Towers, which he subsequently sold to Petronas, as well as licences for Astro (satellite TV) and Maxis (telecommunications).

When Dr Mahathir was asked about Mirzan and the state rescue of his son, he said in his trademark sarcastic manner that all businessmen were his cronies. Fact is, many of them were. Question is, how much did he benefit from them and how much was his judgement as prime minister impaired by such proximity?

So when Mukhriz talks about corruption and how it is the No. 1 enemy of the Malays, he is right but terribly disingenuous and hypocritical. It was what his father did that resulted in profligate corruption in Malaysia. Mukhriz and his siblings may well have benefited from this, too.

It was Dr Mahathir who rigged the system to remove transparency, good governance and accountability. It was he who refused to give independence and expertise to investigating agencies to control corruption so that he could be the one to dispense patronage.

It was he who contributed to the rise of despots and dictators like himself who threw good behaviour out the window simply because they could get away with the plundering of billions of ringgit.

Najib, through Jho Taek Low, Ahmad Zahid Hamidi, Tengku Adnan Tengku Mansor and others, simply followed, albeit more stupidly, and did what Dr Mahathir had done before. They indulged because the system was rigged in favour of the top politicians – by Dr Mahathir.

When there was real hope that Malaysia could finally crush corruption with the victory of Pakatan in GE14, Dr Mahathir unceremoniously snuffed it out under his boot – he ignored reform, he reinstated multi-billion ringgit projects, he brought Daim back.

And now, Mukhriz has the gall to talk about not aligning Pejuang with the corrupt. If he wants to do that, he needs to get rid of Mahathir first and himself after that and hope, impossibly, that the rest of Pejuang are indeed incorruptible.


P. Gunasegaram, editorial consultant of The Vibes, says that the line between corruption and patronage is invisible
Posted by KTemoc at 8:59 pm