Last week, many articles were published about Malaysians abroad who excelled in their particular fields. Penang teenager Celine Chung wanted to play football and is now training with the U-17 Bayern Munich women’s team. Alor Star’s Jocelyn Yow has become the youngest mayor of a small town in California, and 60-year-old Sam Lim, formerly of Muar, has won an award as the best policeman of the year in Western Australia.

The nationalist cybertroopers were out in full force. One said, “Good riddance. Hope more pendatangs leave.”

Perhaps these nationalists need a lesson in what makes many “pendatangs” more successful than some Malays.

Success for these “pendatang” came from their personal drive, ambition, tenacity, hard-work, commitment, discipline and dedication to duty.

Many non-Malays are sidelined and overlooked in Malaysia, despite their patriotism.

Sam Lim, formerly a policeman in Muar in the 1980s, quit because of the poor career prospects. In Australia, his command of many languages – Malay, Indonesian, English, and various Chinese dialects – enabled him to integrate with the migrants in Australia and explain the laws of the land.

I had many friends at school, whose fathers served in the armed forces. Many migrated because, like Lim, they found that they were not promoted whereas, junior Malay officers with fewer years of service and experience, were promoted beyond their capabilities.

These non-Malays felt unwanted, unrecognised and unappreciated. Some had served in the Emergency and were as patriotic as any Malay. The affirmative action policies are depriving Malaysia of many talented individuals. Our loss is the gain of the countries which happily adopt these Malaysians.

Kepong MP Lim Lip Eng has praised the success of these Malaysians and encouraged young graduates currently residing overseas to return and serve the people and the nation. He urged them not to give up on Malaysia, but to fight for the ideals that they believe in, and turn the nation into a better country for all.

Lim should realise that it is easier said than done.

Many of the people who left did so reluctantly because they were denied opportunities, such as in education, and they didn’t want to suffer like their parents at the hands of the affirmative action policies. Less qualified people were able to get scholarships or jobs. Non-Malays were criticised for being unpatriotic if they refused to join the armed forces. Many found that it is “who you know” that counts and not meritocracy.

Many young graduates also wonder how their own children would fare when they start a family. Will their children also be sidelined, like them and their parents?

Racism and bullying is rife in many government schools. The quality of teaching is poor. Sometimes, speaking English may land a pupil in trouble. They may be accused of wanting to show off, or being unpatriotic. Few can afford to send their children to international schools.

The returning graduates will also wonder about personal safety. If people like Pastor Raymond Koh can disappear without trace, what does that say about the security of the nation? If children can be kidnapped by their own convert fathers, and the police have no clue as to their whereabouts, people will be concerned.

They will have heard about dress codes and that non-haram items are banned in some shops, and will wonder whether they will be living under an authoritarian regime. Why should they return to this uncertainty?

They will have read about police reports being filed against some university students for wanting to debate the role of certain individuals in the nation. They will also wonder how stunted their children’s mental development will become with affirmative action policies. They don’t want their children to remain second-class citizens and be denied many opportunities.

Unless the opposition politicians can get their act together and reverse many of the unsettling trends with respect to race and religion in the country, it is doubtful if many graduates will want to return. It is not just the non-Malays who stay away; for several years, many Malays have also decided that they have had enough of the stifling race-baiting and religious extremism in Malaysia.

GE-14 in 2018 gave many of them hope, but 22 months later, they have reconsidered their decision to return. 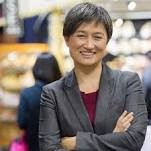 Born in Kota Kinabalu 5 Nov 1968, Penelope Wong Ying-Yen became the first Asian-born member of an Australian cabinet in 2008.
She has been a Senator for South Australia since 2002. She has served as Senate leader of the Australian Labor Party since 2013, and is currently Leader of the Opposition in the Senate.
She was a cabinet minister in the Rudd and Gillard Governments from 2007 to 2013.
Posted by KTemoc at 11:19 pm