Azumu, the PRIBUMI nobody who frequently becomes somebody 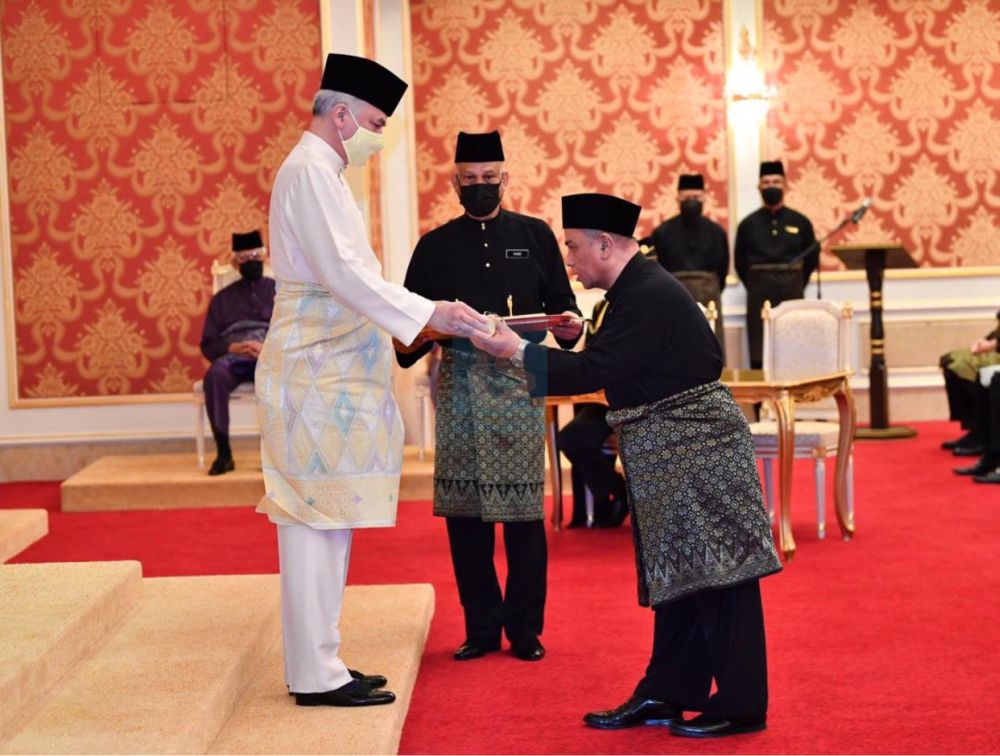 Datuk Saarani Mohamad is sworn in as Perak mentri besar in the presence of Sultan Nazrin Muizzuddin Shah at Istana Iskandariah in Kuala Kangsar December 10, 2020. — Picture via Twitter

KUALA KANGSAR, Dec 10 ― Perak Sultan Nazrin Muizzuddin Shah today said there was no pride in his appointment of a third mentri besar in the state since the 14th general election in 2018.

The Sultan said this was a reflection of failure in the Perak Legislative Assembly.

“It portrays the failure of leadership among politicians to be guaranteed consistent support to enable the mind and energy to be focused on governing the state in the best way for the benefit of the people,” he said in his speech during the swearing-in of the 14th MB at Istana Kinta here.

The Sultan reminded the state lawmakers that they were elected only because of the trust shown by the people.

“The people have chosen them to carry out the responsibility to provide services and upgrade their economy as well as their social needs.

“The people, especially the poor, are affected by the ongoing Covid-19 pandemic, where some have lost their jobs and income.

“The people should not be betrayed due to the influence of the emotional grudge over conservative political thinking,” he said.

The Sultan also pointed out that a person’s true character will be revealed when he comes into wealth, position and power.

“When a person is surrounded with greedy, self interest, double faced, with hidden intention people as well as those who misused relationships with leaders, the humble and moderation culture disappears, with the person’s arrogance appearing."

*********
kt notes:
I like to make the following observations, namely:
Strictly speaking, it's only the 2nd MB and not the 3rd as HRH believes, because Azumu was the 1st as well as the 2nd, when he retained the MB position while he jumped as MB from the post-GE14 Pakatan Harapan state government to becoming the MB (again) for the post-Sheraton Movement state government. 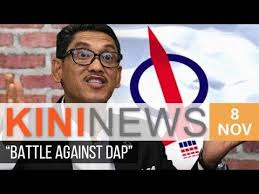 already backstabbing Perak DAP whilst still in Pakatan Harapan, and proudly telling his PPBM mates he had help from Perak UMNO
If anything, the discredit of HRH's criticism of such leadership changes must fall squarely on Azumu's shoulders and not anyone else's, for his stupendously treacherous frogging and causing the 1st post-GE14 elected state government to fall.
Thus HRH's “When a person is surrounded with greedy, self interest, double faced, with hidden intention people as well as those who misused relationships with leaders, the humble and moderation culture disappears, with the person’s arrogance appearing" applied most aptly on Azumu and no one else but Azumu.
Whether HRH had meant that of Azumu or not doesn't matter, because Azumu still deserves the opprobrium. Azumu has been a stark 101% grade asshole.
Finally, I have to recall for all my comments when the PH state government fell as Azumu frogged across to the PN state government - that I was mucho SURPRISED when HRH picked Azumu AGAIN to be MB of the new Perak PN state government. 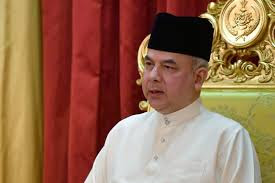 I was SURPRISED for the reason I have long suspected HRH was/is an academic 'snob' (pardon my use of this word), in that he placed/places value on tertiary education, as I observed in 2008 when he as Regent (his late dad Sultan Azlan Shah was then sick) picked from the post-2008 winning Pakatan Rakyat coalition (not Harapan yet) Nizar Jamaluddin (then PAS, now AMANAH) to be MB even though PAS was only a junior component party of the PR.
Nizar was then the most academically-professionally qualified ADUN amongst the PR people, considering the PKR candidate was only a postman whilst there was NO Malay ADUN amongst the winning DAP candidates. 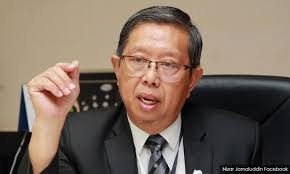 That was what threw me back when HRH picked Azumu to be MB again when the bloke didn't even complete his Business Studies degree with Edith Cowan University in Perth, Australia (to be fair to Azumu, he admitted and confessed that he did not complete the course)
In UMNO, we have Saarani Mohamad who possessed a diploma in Physics & Maths from UTM, and a degree in HRM from the Open University Malaysia (OUM). 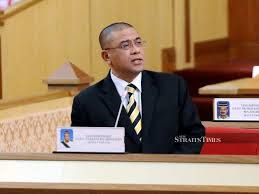 So, delving into the final analysis, with much respect we must listen as HRH asks himself why he picked Azumu to be the state 2nd MB (since GE-14) and not a better academically qualified Saarani, and more so as Azumu showed his frogging flexibility.
On a separate matter, Azumu proved he was (is?) a man in the right place at the right time with the right Boss. He was a nobody but with his PPBM ADUN-ship under PH, the sole one for Bersatu, his Boss (Mahathir) ensured he became Perak's MB after GE-14 even though the DAP has 16 ADUNs with even a professor of constitutional law in Dr Bari Aziz. But DAP dared not questioned Mahathir then as Bersatu seized the prize in Perak after GE-14 - poor Prof Bari must be damned disappointed as he was placed in a Perak state seat in GE-14 (to become MB instead of being a MP at federal level).
Then, after the Sheraton Treachery, Azumu from his 'nobody' status became Deputy President of Bersatu (just a heartbeat or heart-attack away from Muhyiddin). Eff, this guy may even become the Malaysian PM one day, wakakaka.
But I detest Azumu with a vengeance because he was a MB who could simply and with callousness appropriate farmland cultivated by farmers for over 40 years to just gift to his state footballers, when he could have easily and with the people's interests at heart continued PR's policy to make those state TOL land freehold for those hardworking farmers. He's a real mean bastard.
Posted by KTemoc at 1:51 pm