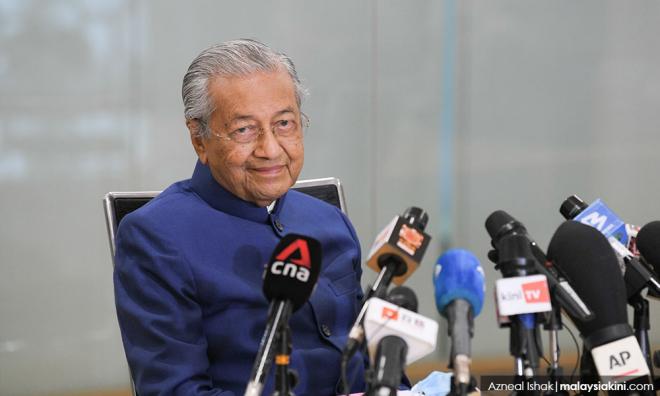 Out, damned spot! Out, I say!
- Lady Macbeth, Act 5, Scene 1, Macbeth - William Shakespeare
COMMENT | Dr Mahathir Mohamad is so obsessed with power that retirement is not in his vocabulary. He still entertains the wistful hope that he can come back and become prime minister for the third time.

He thinks the people do not have enough of him and would ardently love to see his face yet again. The old doctor is living in a make-believe world where he sees himself still enthroned and calling all the shots.

Mahathir is deluding himself. Does he really think that the country wants him back so badly? No, sir. He has had his day in office.

He had tasted power for more than 20 years. He ruled the country like there was no end. The world was his oyster.

Shockingly, he did return to office way past the age 90, on a tide of a historic election. The second Mahathir era was about to begin, but it was cut short and he took himself out of office in a huff.

After a lifetime in politics, he should have seen all his dreams for Malaysia realised and the country rooted firmly in justice and equality. A land flowing with milk and honey.

But his story did not play out his way. Today, the country has lost its sense of direction and purpose. Even the second coming of Mahathir did little to heal the many illnesses wrecking the body politic.

His reappearance on the political stage - and along the way toppling two prime ministers (one "sleepy", the other corrupt) who succeeded him - did not help much in inspiring confidence in his, by now, stale leadership. What more can Mahathir offer, given the current sad state of affairs in the life of the nation? Catchy slogans? Inspirational ideas? A new frontier? Another vision? Fresh syrup in old bottles?

If he is itching to return, he can only count on the support of old folks like him, especially those who reside in the conservative heartland, who still revere him. Or some old, ageing friends who were once his political foes.

Mahathir gives scant support to the idea that the fate of the country can and should be decided by young leaders. He thinks the young should forever kowtow to the elders. Experience knows best, so runs the out-dated school of thought.

How wrong he is. The youth of today are no longer in awe of the old guard. They are disappointed, disillusioned, angry. They want change. They demand change and they want to be the agent of change.

But Mahathir is not the person to stand in the background, fold his arms and allow the youth to take charge of the national destiny. He would surely be miffed if the voters reject him.

The seasoned politician in him would not permit him to take things lying down while the new order, green behind the ears, makes all the policy decisions.

He would come out breathing fire at the perceived weaknesses or excesses of the new government and would even form or encourage alliances with like-minded geriatric power-seekers to undermine and bring down the brave, young world.

The doctor-turned-politician should have the good sense to step down and go out with grace and dignity and let others have their turn at the wheel.

The country had had enough of Mahathirism. Malaysia doesn't want his prescriptions anymore. Steadier hands are needed to perform emergency surgery on a very sick "patient".

So, in a time-honoured tradition reserved for all those politicians who have outlived their usefulness, the message is loud and clear: doctor, pack your bag and go.
Posted by KTemoc at 10:12 am