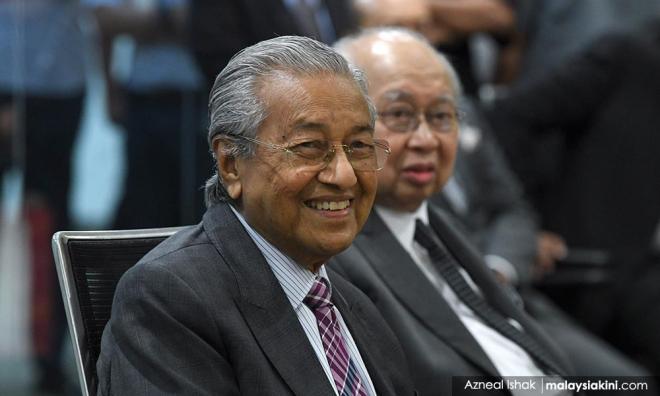 Grand coalition idea intended to help Dr M's survival
by Mohamad Siddiq Azani
LETTER | The idea of a ‘Grand Coalition’ of the opposition is actually another trick deployed by former premier Dr Mahathir Mohamad in order for him to survive the next general election.

Malaysians, especially the youths, have had enough of Mahathir. We need young leaders with fresh ideas and there are groups of potential leaders in the opposition who can fill in the spot. I think it’s about time Malaysians look beyond what the likes of Mahathir or Tengku Razaleigh Hamzah have to offer.

In his recent press conference, the former two-time prime minister (PM) had the audacity to offer himself again for the top job when he himself once made a promise to pass the baton to Anwar Ibrahim.

In all fairness, he should have supported Anwar as the next PM candidate but what he did instead was to nominate Shafie Apdal to the post.

His actions, inconsistencies, and his unapologetic attitude have effectively ripped apart the opposition since the fall of Pakatan Harapan. Mahathir is driving the opposition nowhere. Alas, the people are suffering from this infighting.

Anwar is still relevant, to say the least, and is committed to a reform agenda, unlike Mahathir who was given the chance to helm the government but failed to execute it. The best proposition Mahathir can offer is to blame the previous government, and give excuses for failing to fulfil his general election manifesto.

The idea of a grand coalition of the opposition is highly unnecessary since Harapan and Pakatan Harapan Plus have made their presence known nationwide. What’s the point of having another ‘coalition’? Is it to accommodate those independent MPs who are currently party-less?

This is what Mahathir sees - to enable him and his independent faction to survive the next general election. He understands that in order to win a seat in a general election, one must have a party or coalition and Harapan is one of the major coalitions of political parties in Malaysia that will serve his needs.

He knows that it is impossible to win a seat as an independent as he had experimented in the Slim by-election. Muda on the other hand, will not find it difficult to contest in the next general election, even though the party is yet to be registered. This is due to the fact that its leader Syed Saddiq Abdul Rahman’s political alignment is not too much different from that of DAP and PKR which strives for all Malaysians and, especially Muda in this case, the youths.

As this idea of a youth-based party is still new in Malaysia, Anwar would like to see how Muda can impact Malaysian politics. Therefore it will add value to Harapan as a whole, as the coalition heads towards the next general election.

Mahathir’s Malay-based Pejuang, on the other hand, has nothing to offer and is seen as inferior to Umno, PAS, or even Bersatu. Mahathir’s loyalists are still rallying behind him, but it is not enough to win an election.

This is the time for Anwar to put an end to Mahathir’s political career, his long-time arch-nemesis. As the chairperson of Harapan, Anwar determines who will contest under the ticket of Harapan. Without his approval, independent candidates cannot use the Harapan emblem.

And to allow Mahathir again inside Harapan, which he previously chaired and resigned, will stir up the coalition once again. It will cause a ruckus and dismantle the opposition even worse than before. The rakyat will also suffer again from this political instability.

I think it is time we bid farewell to Mahathir and his political journey, and thank him for the services he rendered for the country, but we have to move forward.

MOHAMAD SIDDIQ AZANI is a lawyer and secretary-general of Gerakan Revolusi Anak Malaysia (G3RAM).
Posted by KTemoc at 3:29 am