Star Online - Politics is not all about eliminating your opponents, Teng tells DAP (extracts):

GEORGE TOWN: Penang Barisan chairman Teng Chang Yeow has taken the DAP to task for targeting capable leaders from MCA and Gerakan in the general election.

"Is politics all about eliminating your opponents?

"At the end of the day, it is the community who will be at the receiving end.

"I do not think you can see this kind of culture from Barisan component parties," he said during the party's 50th anniversary celebrations at the state Gerakan headquarters in Macalister Road on Saturday (March 24).

Wouldn't you say that what Teng Chang yeow has said, is exactly what MCA had also said in the run-up to the 2013 elections, whence MCA vice-president Donald Lim in an interview with Oriental News Daily appealed, “I hope the people will give us some votes. Don’t make us eat egg.”

And in the general election before that, just before the 2008 election, Ong Ka Chuan who was the MCA’s secretary-general had to swallow humble pie and plead: “If you have five people in your household, I plead with you to give one vote to MCA.”

Now, with Teng making his (admittedly more dignified) appeal Politics is not all about eliminating your opponents, I see a repetition of MCA's begging in 2008, 2013 and now 2018, a very shameful leitmotiv.

Of course poor MCA realises this general election may well be its final chapter, as it will be for Gerakan.

Both MCA and Gerakan had distinguished starts, with MCA struggling together with UMNO and MIC for Independence from the Poms, battling for citizenship for Chinese Malaysians, organising vernacular education, etc whilst the Gerakan Party in its victorious debut in 1969 was touted to be the true multiracial replacement for the Alliance Party (BN's predecessor).

Things went all wrong along their way to 2018.

How are the mighty fallen in the midst of the battle! O Jonathan, thou wast slain in thine high places. 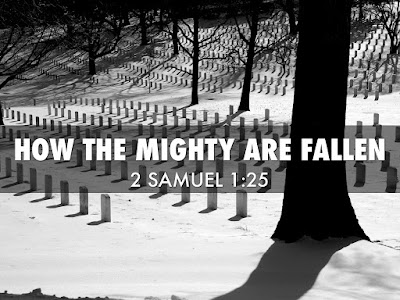