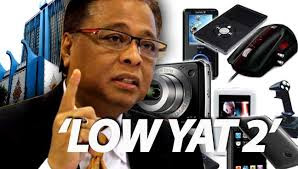 
Ismail explained that this was because the industry was currently dominated by non-Muslims, despite the Islamic requirement applying only to Muslims.

“About 90 per cent of halal market is dominated by non-Muslims and non-Bumis while halal involves Malay and Bumiputera who are 100 per cent Muslims.

“Those days, it is hard to get halal products in Japan but now they have opened their country and try to bring in more halal products,” he told reporters after attending an engagement programme between MARA and Bumiputra entrepreneurs.

He also said that halal products were also attractive to non-Muslims, whom he said associated the status with hygiene.The halal industry, which is expected to grow in parallel to the growth of the Muslim population, is worth more than US$2 trillion (RM8.3 trillion).

For a start, he is lying because bumiputeras are NOT 100% Muslims. Let's ask him whether an Iban, Murut, Kadazan and an Orang Tua who are Christians are bumiputera?

If he says they are NOT bumiputera, then ask him what would they be?

What about Peninsula aborigines who are Christians and Thai Malaysians who are Buddhists?

The upshot is Mr No 2 is a bullshitter.

Will Mr Low Yat 2 also provide rent-free factories and office accommodations to wannabe halal-food entrepreneurs as he has to Mara Digital shops?

And also taxpayers' funded logistic support to those wannabe entrepreneurs free of change as well as well?

And to think it all started with a criminal Shahrul Anuar Azizi who snatched and stole a mobile phone from one of the shops at the (real) Low Yat, was apprehended by a Malay security guard whereafter he called his gang to seek revenge and nearly caused a riot at the (real) Low Yat Mall.

Shahrul Anuar Azizi had claimed he was manhandled when the shop keeper attempted to wrestled the stolen phone back. He then brought his Malay mateys to Low Yat to 'pay back' the manhandling by the Chinese shop staff, though independent observers like a Malay security officer at Low Yat deflated the grossly-ballooned accusations by the thief's friends.

A Mail reported on the aftermath where ISMA involved itself in defence of the near riot and vandalism at Low Yat Plaza, as follows:

Isma asserted that it is only natural for Malay youths to release their anger on the Chinese traders in the popular tech mall as the Malays are known for running amok, and they would not have done so if they were not provoked by what the Muslim group claimed to be chauvinists.

Such was the racist style of an Islamic NGO which should rightly be called a Malay (not Islamic) NGO if it was going to be racist.

Magistrate Nur A'minahtul Mardiah Md Nor, in finding Shahrul guilty, said the defence had failed to raise reasonable doubt in the case. "This case has garnered a lot of public interest and sentencing should reflect the fact that the court views such offences seriously. When the court sentences an offender, our priority is to rehabilitate the offender, to enable him to go back to society."

Shahrul who was dressed in a green T-shirt and jeans, was calm during sentencing. [...]

Shahrul, 23, had claimed trial to stealing a black coloured Lenovo S860, priced then at RM800, from a smartphone kiosk at the mall in Bukit Bintang around 4.47pm on July 11.

He was charged under Section 380 of the Penal Code, which carries a jail term of up to 10 years and whipping, upon conviction.

Additionally, Shahrul Anuar Azizi and his mate Muhammad Shameer have been charged for wounding Hafizuddin Hamzah, 27, with a machete, in front of the Mizan Racing Tuned workshop in Jalan Jelatek on Feb 20.

Shahrul Anuar Azizi certainly has quite a CV, but as ISMA asserted, it is only natural for Malay youths [friends of Shahrul Anuar Azizi] to release their anger on the Chinese traders in the popular tech mall as the Malays are known for running amok, and they would not have done so if they were not provoked by what the Muslim group claimed to be chauvinists.

Anyway, following the near riot caused then by the convicted thief, minister Ismail Sabri, already notorious for his often unpleasant and highly offensive remarks, did the Hang Tuah bit and proposed and implemented a new 'Low Yat' type mall exclusively for Malay traders in electronic goods, glibly described by many as 'Low Yat 2'.

This was the best part reported by the MM Online:

Despite having only Bumiputera traders there, Ismail Sabri ironically urged non-Malays to support the mall and emulate their Malay counterparts whom he described as “colour blind” in their shopping preferences.

He maintained that the idea of a Bumiputera only tech mall was not racist, and that it was only intended to help the community venture into the IT business.

Not racist? He certainly has thick-skin.

Recall this minister Ismail Sabri had in February this year blamed Chinese traders, yes 'Chinese traders' and not just traders, for refusing to reduce the prices of goods even though the price of petrol has come down.

He then called on Malays to boycott Chinese traders.

As one of my visitors remarked on the prices of some American-originated fast food, who own those franchise? Chinese?

University Malaya law lecturer lecturer Azmi Sharon informed us that Ismail Sabri Yaakob had been not only a bullshitter but a racist batu api (provocateur), claiming “... that only the Chinese oppress consumers” and that ...

“... only consumers who are being oppressed have been the Malays”.

Ismail Sabri Yaakob then said he would terminate all sponsorships from Taylor College (attended by mostly nons) and create a new Taylor College 2 in Mara for only Malays, just like he did Low Yat 2 also only for Malays.

The man obviously loved creating No 2 and telling fibs, hypothetically like Chinese now dominating JAKIM so JAKIM No 2 would be essential, wakakaka.