From MM Online about BN screwing PAS in Selangor:

According to its simulation of the next state elections, BN could stand to win up to 11 more state seats due to the increase of risky Opposition seats. Most of these will be at the expense of PAS which is set to lose up to eight seats. [...]

“BN’s gains come at the expense of PKR and PAS, though PAS loses the most. PAS is expected to lose five to eight seats and see their number of high-risk seats increase.” [...]

“Out of the seven minimum seats PAS is expected to win, four are at-risk. A swing to BN in PAS seats can see PAS reduced from 15 seats in GE13 to three seats.

“This could give BN a potential total of 27 seats, needing only two more at-risk seats from PKR in order to win control of the state,” Politweet said.

Without redelineation, Politweet’s simulation predicted that PKR and DAP can control the state government together without relying on PAS, as it would win at least 30 seats, one more than the simple majority of 29 needed in the 56-seat legislative assembly.

However, redelineation will reduce their winnable combined seats to as few as 26. [...]

In its latest redelineation exercise, the EC is seeking to change the names of 12 parliamentary seats and 34 state constituencies nationwide ahead of the next general elections due in 2018. [...]

Apart from bloody brazen blatant gerrymandering to favour BN, the EC's deliberate change of seat names has been alleged as another nefarious tactic to confuse pro Pakatan voters.

The dedak-driven EC might as well change the name of Malaysia to Boleh-Land. But please bear in mind, this is EC V-2.0 which is a bulldozer version of the earlier EC - it now doesn't give a f**k what you think or has written in. Najib will get what he wants, no matter how crude the EC has been. 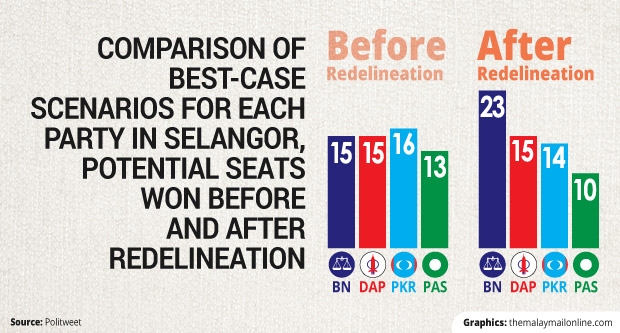 Oh, what has not been mentioned is that, gerrymandering or not, PAS' hitherto Chinese support will switch over to BN, minus DAP support for the Islamic Party but add on MCA-Gerakan support for UMNO.

In a way the Chinese voters in those seats will say, "Corruption moe-maan thai (no sweat, we can deal with that), Fanaticism say-loe (drastic, we can't)", wakakaka.

The other weirdo omissions have been Amanah and Pribumi. Where will they stand in the re-delineation? And at whose expense?

It's true that both PKR and Anamah had both publicly voiced their consent to Pribumi taking over some of their seats, but to what extent?

The above Politweet graph is thus an incomplete story of what will happen in Selangor in the next state election, but assuming for one instant, we accept Politweet best (or worst) case scenario, in the re-delineated 56-seat state, (to re-emphasize) we could have, plus and minuses here and there:

PKR 14 (how many surrendered to Pribumi?)

Yes, the total number of seats above exceed 56 but as I just mentioned, it is inclusive of plus and minuses here and there.

Alternatively, PKR may abandon DAP to oblige UMNO, also in the name of Malay Unity.

Hmmm. so this is how the Kajang Satay was to have better positioned PKR nearer to Putrajaya, and believe it or not, TP bought that kerbau (many f**king satays) wholesale, while Anwar bought for himself a long-stay booking in Hotel Bamboo River.