From the MM Online about estate Indian migrating to the cold freezing suburbia: 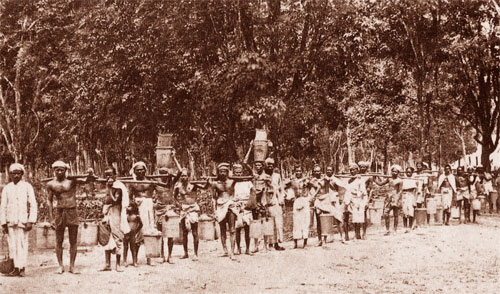 KUALA LUMPUR, Nov 15 — Activists and social workers say the exodus out of estates has left ethnic Indians ruined, following a study that revealed the minority is trailing behind other ethnic groups when it comes to moving up the economic ladder.


According to them, the migration out of estates that began in the 1970s as Malaysia’s urbanisation picked up pace caused hundreds of thousands of Indians to be displaced and without any social support.

According to MySkills Foundations, an NGO that has worked almost exclusively with poor Indians over the past five years, there was no policy to ensure a smooth migration to urban areas as well as a lack of integration.

“For the Chinese, the Chinese new villages later became towns. For Indians, they woke up one day and the estates were no longer there. They had no skills and no education, so the social mobility of the children is limited,” said its director S. Pasupathi.

“There were no special programmes either, such as positive discrimination, which is what happened with the Malays,” he added, referring to the New Economic Policy.

Parti Sosialis Malaysia’s Dr Michael Jeyakumar shares Pasupathi’s view. Both said one of the key contributing factors was that the Indians had been insulated within their own communities in estates.

“When they moved out from the estates, they did not only lose their homes. They lost their community, their schools,” the Sungai Siput MP said, pointing out that estate-based Indians had created communities within the estate structure.

“In estates, they were in a self-contained environment. When that was broken and they came to urban areas, there was no leadership… nobody to coach them,” Pasupathi added.

Illustrating the migration, Michael said the National Union of Plantation Workers used to have between 300,000 to 400,000 members 30 year ago. The number has now drastically dropped to 60,000, he said.

Pasupathi’s estimate is even lower, claiming that there are only roughly more than 25,000 workers left in estates.

Who is the National Union of Plantation Workers (NUPW)?

The National Union of Plantation Workers (NUPW) is the largest union in Malaysia and one of the largest in Asia. It was formed in the Federation of Malaya in 1954 by an amalgamation of smaller plantation unions. It continues to represent manual laborers and semi-skilled workers in all of Peninsular Malaysia.

Ethnically, its membership has historically been of predominantly Indian origin.

P. P. Narayanan was General Secretary from 1954-1993. The present executive secretary is A. Navamukundan.

And what has the NUPW done, fully knowing what has been happening over the years as its membership dwindled from more than 300,000 to only a reported 25,000 or so today?

Surely the severe contraction in its membership numbers did not happen overnight a la a post tsunami devastation.

And we have FMT reported reporting some 5 years ago the following (brief extract only):

KUALA LUMPUR: Unhappy estate workers want the government and the Malaysian Anti-Corruption Commission (MACC) to step in and investigate the National Union of Plantation Workers (NUPW) for alleged misappropriations dating back to the 1980s and poor management of workers’ contributions.

They said the government must step in to address issues affecting the members, especially shares in financial institutions and the Great Alonioners Corporation Trading Ltd (Gatco).

Please read above FMT article in full and be shocked by the allegations against NUPW for mismanagement of the workers' assets.

That's the problem with Indian organizations, whether MIC, NUPW, etc. They prefer not to talk about the dying elephant in the room until someone else cries out WTF!

Ten years ago I wrote The Toddy Syndrome in which I stated that probably the most deprived and marginalized ethnic group in Malaysia, a land of bountiful plenty, is the Indian community.

The typically hard working but unskilled Indian struggles at the lower scale of employment, earns enough to live from hand to mouth day to day, has no or little after-hours amenities, has many children as a result of their sole entertainment (not unlike Chinese farmers in remote rural areas).

At the end of a harsh working day he dashes off to the local ‘pub’ for several tin mugs of watered toddy, gets himself pissed drunk to blank out his agonizing frustration, apprehension, worries, physical & mental pain, hopelessness and anger at his-fate-decided-by-the-gods.

The evil toddy has become the straw to cling on for many socially-drowning Indians. Its devastating effect produces the syndrome, but the disease is hopelessness in an ever increasing competitive world that is rapidly leaving many Indian Malaysians behind.

So, today's Indian migration from the estates to the slums of cities has further worsened the Indians' social-economic plight.

And what is the MIC doing or has done?

Except for their upper and middle classes, Indian children are born into immediate disadvantage. Their community is looked down upon. They are assigned ownership of approximately 30% of Malaysian crimes which cannot be attributed to foreign migrant workers (and we saw in July this year how an Indian sweetie and two others were hacked to death by machete-wielding Indian thugs at the Destiny Club in Dutamas, Kuala Lumpur - I've seen photos of the victims and found them too horrific, just too gruesome to be included here).

The lower end of Indian Malaysian society has become the debris, flotsam and garbage of Malaysian society, ignored by authorities, the Indian community and sadly, also by other communities.

Such is the unhappy lot of the chronic poor, impoverished people, quite a few Indian Malaysians, who would be exploited for the economic and sensual gratification of the ruling class and the rich.

The only Indian Malaysian political party which has devoted efforts in this unfolding tragedy has been the PSM, and it's little wonder it has selected as its symbol a raised clenched fist, signifying the universal cry of 'to struggle'. 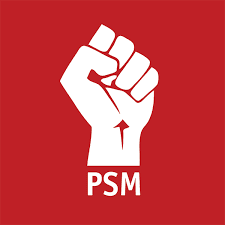 It's also a symbol used by worldwide underprivileged class as in American black society which used the symbol in conjunction with its theme of 'Black lives matter'.

But socialism and it's associated symbol(s) are anathema in Malay society which detests communism because of our nation's communist insurgency for a number of decades and often demonized by the Malay ruling elite, more to tar the Chinese Malaysians (and their ethnic connection with communist China) but alas, with PSM suffering as collateral damage.

When PSM applied to join Pakatan Rakyat in the coalition's earlier days, Anwar Ibrahim was reported as saying:

“I went to Sungai Siput last month and I see there is very confused sentiments in regards to that (PSM logo), to accept the new symbol that is perceived to be macam-macam (all sorts of things).

“You know that with the current propaganda, (it is thought to be related to) communist-lah, (Che) Guevara-lah, Mao Zedong-lah.

“So I ask that this matter be discussed with PSM once more so that a good solution is found.”

OK, let's leave the hard working PSM and return to our estate workers who are migrating to the suburbs for their sons to become gangsters, replacing the erstwhile Cinapek Triads who once dominated society's Underworld.

I urge the government to include a considerable number of them in the FELDA and also RISDA schemes where they can continue to be the backbone of Malaysian agricultural workers as well as become owners of small land holdings of rubber and palm oil plantations.

I also urge the Sarawak state government to grant the poor Indian Malaysians small plots of land to develop and settle down as good citizens, at the same time opening up Sarawak to greater prosperity

I call upon the federal and state authorities to set up trade schools to train their poorly educated youngs to be electricians, plumbers, bricklayers, carpenters, mechanics, operators of heavy and light industrial machineries, etc, but not illegal DVD hawkers (leave that to the bloody poor Cinapeks who love to promote HK, Taiwan, Chinese and Korean TV dramas).

And finally and most importantly, I call upon Indian Malaysian leaders to consider this:

And from that book, be aware that your evil discriminating caste system, worse than the Apartheid of the former white supremacist Afrikaners, has been precisely the problem at the heart of the Indian Malaysians' lost cause, and which is still practised in Malaya.

That is one major and significant difference between the Indian and Chinese poor.

No society has been more affected by class oppression than Indian society, made worse by its religiously sanctified caste system.

Thousands of years of religious and societal indoctrination have convinced the lower caste, despite their modern education, to meekly accept their Indian society's (not God's) assigned stratified positions.

And we Malaysians should be ashamed of ignoring their plight, more so when we had two top Indian leaders or leaders with Indian blood for donkeys years not doing anything substantial for them, namely Mahathir Mohamad and Anwar Ibrahim.