Why is the Kelantan government so uncaring about Aborigines? 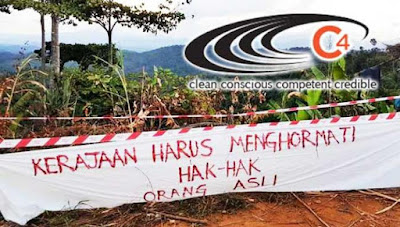 A non-governmental organisation has told the Kelantan government not to use underhand tactics against the orang asli who are trying to protect their land and homes.

Center to Combat Corruption & Cronyism (C4) founder Cynthia Gabriel said it "is deeply alarmed and disturbed at the arrests of about 40 orang asli leaders in attempting to defend the blockades in their native customary lands of Simpang Petei near Pos Gob, Betau Cawas near Pos Bihai and Kelawong di Pos Pasik."

"Is this the type of government who prefers to use underhand tactics and what happened to the promise by the Kelantan deputy mentri besar to meet the orang asli and see the devastation of their forest. It never happened," Cynthia said in a press statement.

“You have to care a little bit. But this is the problem with PAS. Everything they do, they add an Islamic label to it, but in the end the content is zero.”

And Shah Alam MP Khalid Samad, who was a former PAS member, was reported by FMT as surprised and very disappointed to hear about the way PAS Kelantan government is treating the Aborigines so shabbily. He said:

“I’m sure that if the late Nik Aziz were around, he would not allow this kind of thing to happen.”