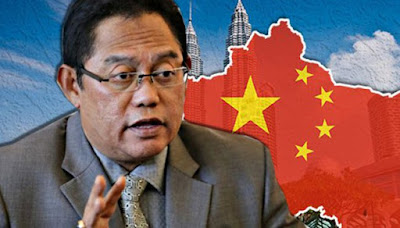 PETALING JAYA: Federal minister Noh Omar says the opposition’s claims that the government was “selling” the country to China is “nonsensical”.

According to a Berita Harian report, the Urban Wellbeing, Housing and Local Government minister said the opposition should refrain from politicising everything and inciting hatred among the people towards the government.

Noh, who is also an Umno Supreme Council member said China’s willingness to invest in Malaysia reflected their confidence in Malaysia’s economy and political stability.

“When we succeed in drawing investors, the opposition says the government is trying to sell the country,” he said after an event in Sepang today.

“However, when investors leave to go and invest elsewhere, the opposition claims that investors have no confidence in Malaysia.”

Noh questioned if it was wrong for the country to receive foreign investments and urged the opposition to refrain from excessive politicking and fault finding when the focus should be on boosting the nation’s economy.

It was recently reported that Malaysian and Chinese companies signed 14 agreements worth RM144 billion, in conjunction with Prime Minister Najib Razak’s week-long visit to China.

DAP lawmaker Charles Santiago however recently voiced concern that an over dependence on China may put Malaysia at risk.

He warned that while Najib’s efforts to woo the Chinese have brought in a number of investments, the move was also part of China’s ongoing effort to use its economic might as a leverage to continue wooing countries in Southeast Asia.

Aiyoyo, Najib has been accused of selling our nation to China, or to put it in crude obscene terms for some (a few) of my visitors, wakakaka, sucking Chinese China's cock.

But let's look at a report by a foreign Japan-based newspaper The Diplomat (extracts):

While China has been Malaysia’s largest trading partner since 2009, as in several other Southeast Asian states Beijing has been lagging behind when it comes to foreign investment relative to major players like the United States, Japan, and the European Union.

In Malaysia’s case, according to data from the Malaysian Investment Development Authority (MIDA), China still ranked below Japan, Singapore, and the United States in terms of newly approved foreign investment in the first nine months of 2015.

Omigosh gasp gulp before our nation turns to sucking China's cock now, we were (in 2015) sucking Japanese, Singaporean and American cocks.

Sucking Singaporean cock was probably the worst experience for someone who hates that lil red dot, wakakaka. But overall, we have been behaving like a slut, and worse, we did what Monica Lewinsky was alleged to have done, wakakaka.

And China has been short-changed (cheated) because we had already sold our country last year (2015) to banzai Japan, kiasu Singapore and rambo USA.

Wait, in fact we had long ago (1982) sold our ass to Japan in the fantastic 'Look East' policy.

Maybe Malaysia should now bend down to give China our already-used behind as compensation, wakakaka.