From Malay Mail Online on the disloyalty of "I'm Malay first" Moody: 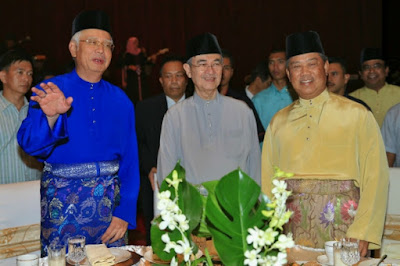 In his Being Abdullah Ahmad Badawi biography, the former prime minister also criticised Muhyiddin for his behaviour in the months leading to Abdullah’s eventual exit as Umno president and prime minister.

“Many friends said I should have sacked Muhyiddin. What he did was most unbecoming of a senior minister. What he said was very bad. It was disloyalty,” Abdullah said.

According to his biographer, Datuk Wong Sulong, Abdullah told friends that his “heart was crushed” by Muhyiddin’s actions.

In November 2008, while Abdullah had been under increasing pressure to resign following the results of Election 2008, Muhyiddin said he could contest either the party’s presidency or deputy presidency, ostensibly to pressure Datuk Seri Najib Razak to challenge Abdullah for party leadership.

Does this mean that all those who are "I'm Malay first" are intrinsically, inherently and inevitably disloyal?

Mind, not all Malays are "I'm Malay first" (eg. Minister Nazri Aziz) but I bet you, regardless, they must be cringing now at Moody's absolute disloyalty to AAB, because Malays keep boasting about their loyalty. Yes, nowhere else save in UMNO have there been umpteen cases of Moody-like behaviour.

Historically, Conservative Malays would tell you Hang Jebat was disloyal, while modern Malays like Kassim Ahmad would say 'twas Hang Tuah who was the makan-dedak palace sycophant who was disloyal to his most loyal matey.

Thus disloyalty has been an UMNO (and predecessor) issue since the days of Hang Jebat, wakakaka.

BTW, in modern leadership studies, disloyalty is not only shown by subordinates to superiors but also considered as a downward flowing bad characteristic shown by superiors to subordinates or (wakakaka) successors.