Mahathir: Then we can name anyone to be PM

FMT on Mahathir's fear that Anwar Ibrahim will become PM: 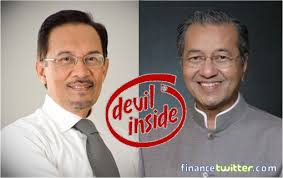 SHAH ALAM: Dr Mahathir Mohamad has rejected a proposal that the Pakatan Harapan opposition alliance name its candidate for prime ministership beforehand, in anticipation of forming the next Federal Government.

Mahathir, who is chairman of Parti Pribumi Bersatu Malaysia said naming a candidate before former opposition leader Anwar Ibrahim was released from prison would only create a split among members.

This is despite the fact that there are several suitable leaders for the post, should Pakatan Harapan secure enough seats to form a government.

Mahathir said the opposition needed to focus on uniting its component parties so they would all contest at the next general election as one entity, under one banner and one symbol.

“The focus now is to unite all opposition parties in Pakatan Harapan, because there are several small issues that must be resolved.

“We have to get to Putrajaya first. Then we can name anyone to be the prime minister.”

Every decent party or coalition contesting in a general election will always nominate its PM-designate. Otherwise how can the voters know who will be leading the nation after the election?

Would you vote for a coalition which refuses to name its PM-designate?

Even with Anwar Ibrahim in jail, Pakatan can name an "interim" PM like (sorry lah, no Cinapek or Tambee unless you're a kutty), say, Wan Azizah or Saifuddin Abdullah - be very very careful of Azmin Ali because once he becomes PM, Anwar can say bye-bye to his freedom from jail and the PM's position.

OK, once GE-14 is over and Pakatan wins, Wan Azizah as PM can process a pardon for Anwar (with the special pardon, based on whatever Pakatan comes up with, like Anwar was unjustly framed, wakakaka). Anwar can then contest in a by-election to join parliament and become PM.

But Mahathir is obviously reluctant to go along with Pakatan on that. Why? What's so wrong about naming Anwar Ibrahim as Pakatan's preferred PM. Why p-dance around the most critical issue by saying Pakatan must win the election first.

Why should Pakatan Harapan contest in GE-14 with a PM-designate?

Note in particular Mahathir's most sinister remark of "Then we can name anyone to be the prime minister."

The current issue, and Pakatan Harapan's preference, is, read my lips, Anwar Ibrahim shall be the coalition PM, not anyone.

Who is the anyone Mahathie has in mind? 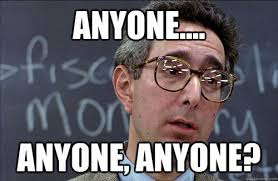 What's Mahathir's covert game plan? What tricks will Mahathir have up his sleeves?

So, Pribumi should be truthful, who does he want to have as PM?

He just wants Pakatan Harapan's strength but not their preferred leader.

I will not be surprised if, in the event Pakatan Harapan wins GE-14, he discards a "used" Pakatan like a soiled condom, to take his pack of pribumis back to UMNO (BN) to then have his nominee head a new (UMNO-led) coalition and to form an UMNO government.

And remember what he has announced, that the PM must report to the Chairman of Pribumi, namely Mahathir himself, on all proposed policies (for his approval).

With such a "limpeh" mentality, how would he ever accept Anwar Ibrahim as PM. I dare say if he has his ways and his nominee becomes PM, Anwar Ibrahim will rot forever in prison.

Don't trust Mahathir as his current actions and slip of the tongue ("Then we can name anyone to be the prime minister.") tell you a lot about his insincerity and covert plans.