From Malaysiakini, about Azmin Ali fibbing: 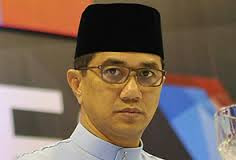 Sulaiman Abdul Razak (BN-Permatang) said Azmin's failure to inform the State Assembly that his statement on the issue was untrue was disgraceful after the matter was brought up on Nov 3.

"He (Azmin) was present at the Rulers' Conference but he was not honest and lied to the State Assembly by saying that the conference had rejected Shukry's nomination when the name was not even brought up at the meeting, and he did not even bring the matter up.

"When asked to explain his statement, he could not. Mohamed Azmin used the Rulers' Conference to get the support of the people...where is the integrity of the menteri besar?" he told reporters at the lobby of the State Assembly here today.

On Nov 3, during the debate, Azmin reportedly claimed that Barisan Nasional used the EC to expose the proposal to appoint Shukry as EC deputy chairman.

However, Azmin who is also the deputy president of Parti Keadilan Rakyat (PKR) said the proposal was not accepted by the Rulers' Conference.

Daulat Tuanku, DYMM Sultan Selangor, ampun Tuanku, Your Highness's MB has been caught for allegedly fibbing. If found true, then it would be naughty naughty of Azmin!

But it might not be a serious crime after all as back in 15th Century Malacca, the then Tuanku's bendahara (or MB today) lied to his Tuanku about Hang Tuah's execution. 'Twas a lie which subsequently turned out to be a blessing for the then-Tuanku.

Maybe Azmin allegedly lied so that he could allegedly protect his mentor and their alleged aspirations?


“A truth that's told with bad intent
Beats all the lies you can invent.”