It's the economy, the bodeh yellow and red!

From Sin Chew Daily via MM Online - Why is ringgit falling despite China deals? an insightful analysis by Lim Sue Goa (extracts only): 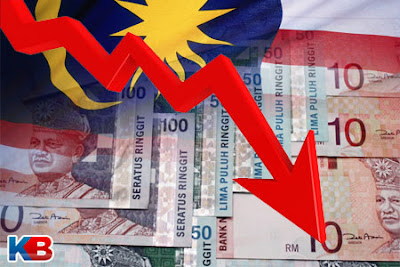 Although the treasury has reduced its dependence on oil revenue, the RM10.6 billion tax revenue target for next year will likely be missed if crude prices slip below US$40 (RM173) per barrel. More subsidy and development expenditure cuts are on the way.

We simply have too many economic challenges ahead of us, but unfortunately our government gets so much carried away by the flashy economic data that it has overlooked the potential risks and the people's feelings, and has failed to adopt the necessary preventive measures.

We can only pray now that external conditions will not get too nasty. If the country sinks into another recession, the rift in the Malaysian society is set to widen. We can never count on Malaysians to donate their gold bars to salvage the national economy like the Koreans did during the Asian financial crisis.

In addition, we must also cross our fingers that the Red Shirts will not go [beserk] berserk during this weekend's Bersih 5.0 rally, or the country's vulnerable economy will take a further beating.

Both the ruling and opposition camps are only serious about wresting the power without workable solutions to tackle the country's economic plight.

The national economy is akin to a steerless vessel in the wide open sea. We can only pray that the sea is calm and we can make it to the opposite shore in one piece.

Once I had a visitor who called himself, if my recall is okay, 'Big Joe' or a moniker to that effect - I remember his words well, that Malaysians would be reasonably cohesive when the economy is okay but fall apart when the going gets tough. It seems we Malaysians are only fair weather brethrens.

Thus Lim Sua Goe of Sin Chew Daily has been spot on with statements like If the country sinks into another recession, the rift in the Malaysian society is set to widen.

And alas, Malaysians are not South Koreans where the latter has one of the most homogenised society in the world who know South Korea is their land, whereas Malaysians are a motley multiracial mixed-up (as in suffering from emotional problems) bunch of f**king confused people, who sometimes wonder whether their country is Malaysia ...

[with some highly 'confused' idiots thinking and even believing their great grandfathers came from the Middle-East, or perhaps they wish - which may explain why some want to bonk their wives on the back of the camel, perhaps a specimen of Malaysia's indigenous fauna?]

... thus I doubt even the most Hang Tuah-ish person in our country will front up with his or her gold bars. Malaysians are berani-patriotik only with their mouths but not their pockets, wakakaka.

And while our legislation allows rallies and protest what-ever, now would hardly be the time for Red Shirts or Brown Sarongs to be clashing with Maria Chin's mob, as Lim Sua Goe has mentioned, the country's vulnerable economy will take a further beating.

Don't blame the GST as there are currently 160 countries around the world subscribing to this simple consumption tax system, including the following ASEAN nations & their respective GST rates (minus Midas-rich tax-free Brunei and Myanmar, the latter having instead a 'commercial tax'):

Malaysia's GST rate is one of the lowest in the world second only to Japan, Taiwan and Niue of 5%. Please check where Niue is, wakakaka - for more on Niue, read here.

Besides, GST replaces the previous Sales and Services Tax (SST), where the latter was up to 10%.

This means that with GST, prices of goods and services could:

(i) remain the same (for a host of stuff which are not GST taxed including foodstuff such as meat, eggs, seafood, herbs and spices, haam taan (a favourite of sweetie Teresa Kok), fresh veggie and fruits, cooking oil, baby formula, coffee, tea and cocoa, 4000 over medicine on the National Essential Medicines List, etc),

(ii) go up for goods which were not previously taxed such as beauty products, toys and games, electronic gadgets, etc,

Those who winch and whine about GST are just negative minded people who are always finding faults instead of seeing that the glass is half full of kopi-o rather than half empty, or political char-koay-teow sellers, wakakaka.

To reiterate, almost all the world has GST including the significant ASEAN nations, so just f**king get use to it.

As I mentioned in my yesterday's post Incongruous alliances, about Old Fogies rushing pell-mell into their power-crazy lil' schemes to beat Father Time, Lim Sua Goe is once again spot on with a reminder that:

Both the ruling and opposition camps are only serious about wresting the power without workable solutions to tackle the country's economic plight ...

... which f**king include two confused Muslims, one wearing bloody Red and the other shitty Yellow.