When you hear of aborigines or natives blockading loggers from entering their forest you would immediately think of Sarawak and the state government backed timber companies. 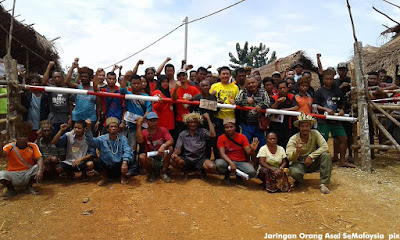 Oh, how evil was the state government, you might exclaim angrily. Taib Mahmud wasn't and still isn't exactly a popular bloke.

But this time you can't blame good olde Taib because the scene of blockading loggers has shifted to Kelantan, wakakaka. Besides, Taib must be busy dealing with his new Lebanese wife and the alleged bomohs from the Middle-East, wakakaka again.

So in the Peninsula scene, Malaysiakini has reported:

Orang Asli villagers from Pos Balah, Gua Musang are expecting a clash with authorities this Sunday following the Kelantan Forestry Department's notice to break up their anti-logging blockade at the Balah Forest Reserve.

Speaking at a Jaringan Orang Asal SeMalaysia (JOAS) press conference, blockade representative Kamal Alek said about 200 of his family and friends are "ready to sacrifice their lives" to ensure no encroachment in the forest.

He said the residents feel this is their last resort following the increase of logging near their village, as calls for dialogue and memoranda sent have not been heeded.

"There might be a clash but we will continue with our blockade. If they tear down the blockade, we will rebuild," he said at the press conference in Petaling Jaya, Selangor.

The round-the-clock anti-logging blockade by the Orang Asli community at the Balah Forest Reserve, Gua Musang started in October.

Meanwhile, JOAS expressed disappointment over the authorities' notice to clear the blockade area.

Its deputy president Zuhdi Baharu, 34, said the government did not give ample guarantee that there will be no more logging.

"We are very disappointed with the state government because they have not met with us even once since the issue broke out in September to discuss this serious matter.

"In fact, Deputy Menteri Besar (Mohd Amar Nik Abdullah) accused the Orang Asli of having been influenced by outsiders. This is an insincere comment made to absolve responsibility over the issue," he said.

He said the local community has held various demonstrations and sent multiple memoranda, decrying how the logging has affected their water source.

"This is not Islamic leadership," he said.

And as a side, also recall dear olde or young Mukhriz was egging the Kedah government to charge Penang for the use of its water from a river even though the law said that couldn't be done?

Well, switching over to Kelantan now - the state has had devastating flood in recent times and experts have pointed out that excessive logging has been the culprit, though PAS' Nik Abduh claimed Allah swt wasn't happy because people were not backing hudud, and thus Allah swt sent the flood to Kelantan in the fashion of the global deluge in the time of Noah pbuh.

Why Allah swt was punishing Kelantanese, the most ardent of hudud backers, instead of those pagan, Buddhist, Taoist, Christian and atheistic Penangites like kaytee, is something only Nik Abduh could explain.

I wonder whether Nik Abduh had been ultra blasphemous for blaming Allah swt when it was the logging his PAS state government had authorised?

Was Nik Abduh shitty ignorant about excessive logging screwing up the water catchment and causing horrific flooding, or was he using or misusing the divine name of Allah swt to hide his state government's environmental crime?

Which in the case of the latter is an abuse of the divine name of Allah swt, which in turn is extremely blasphemous. But does he care a shit?